Fanon article ownership
This fanon page was created and is owned by TheLopman (talk). Unless the edit is constructive and/or minor (such as fixing a template), please do not edit this page unless given permission from the author.

Quinn Caliente is one of my Sims 2 Sims, who resides in Pleasantview with her mother Dina Caliente. She is a teen with the Romance aspiration. She is the daughter of Dina Caliente and the late Mortimer Caliente, twin sister of the deceased Alan Caliente, half-sister of Cassandra Goth and Alexander Goth, and granddaughter of the late Flamenco Caliente, Nighat Caliente, Gunther Goth and Cornelia Goth. She enjoys baking, even though she is bad at it.

Quinn's babyhood was relatively uneventful for the first couple of days. One day, however, her father Mortimer died. She was asleep in her crib, and was too young to have any recollection of the event anyway. Dina cared for her and Alan alone after that, which was difficult for everyone. Eventually, it was time for Quinn and her brother to grow up into toddlers. Dina bought cakes to celebrate, and they grew up.

As a toddler, Quinn was somewhat neglected. It wasn't because Dina was an uncaring parent- it was just hard for her to split her time between caring for Quinn, Alan, and her own needs. In the end, there wasn't any time for Dina to teach Quinn any of her toddler skills, and she grew up badly.

Quinn's childhood was just as glamorous as you might expect. She got good grades in school, baked in her oven, and played with her dollhouse. She and her family didn't talk to each other much, and while she was asleep, Dina was at work. Quinn has a lot of interest in TV, paranormal, and school, so naturally she did well in school and watched a lot of TV. Her childhood was boring, to say the least, until the fire and Alan's subsequent death.

One day, the family computer broke somehow. Dina told the kids to stay away from it as she tried to fix it, so they went up to their shared bedroom and planned to play with toys until she was done. Unfortunately, she never finished. Instead of fixing the computer, Dina broke it even more- it shocked her, and set the desk on fire. The twins ran downstairs upon hearing their mother's screams, and found the desk in flames. The fire grew and grew until it had swallowed everything in the entryway. Alan made a break for the front door to try and escape, but the fire swallowed him up, too.

Despite being twins, Quinn and Alan were not very close. Quinn was certainly sad about her only brother's death, but it was not difficult for her to move past it. She now is a teenager, and she is waiting for the day when her mother resurrects him. It will certainly be interesting for her to watch.

As a teen Edit

Quinn has recently grown into a teenager, and is focusing more on pursuing her aspiration than getting good grades in school. She has her eyes set on several different boys. Her grades have slipped from straight A's to a B. She figures that she probably won't go very far in life, and believes tat her mother's sanity is slipping away at a rapid pace. She is just trying to be happy for the time being, but has no idea if she will succeed in life. 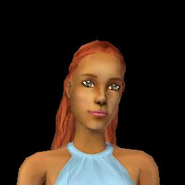 Quinn as a teen. 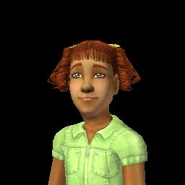 Quinn as a child.

Alan's death.
Add an image to this gallery
Retrieved from "https://sims.fandom.com/wiki/Fanon:Quinn_Caliente?oldid=799187"
Community content is available under CC-BY-SA unless otherwise noted.