Her appearance and dressing tells us that she's indian. This has also been confirmed by the creator.

Her biography says that she uses the youth elixir for her and her family to stay young . This would also make sense seeing as to how from the Sims 2 timeline, she should be dead and her children should be in the elder lifestate or deceased. This can also be confirmed because the son of Ophelia Specter is an elder and Ophelia was a teen at the start of the Sims 2

She has traits like family oriented and nurturing which would explain her daughter's biography, but she also has the mean spirited trait which is a reference to her nasty and "savage" behaviour towards her family. 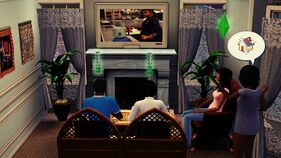 The Ramaswami Household, as from the storytelling pictures
Add an image to this gallery
Retrieved from "https://sims.fandom.com/wiki/Fanon:Priya_Ramaswami?oldid=895288"
Community content is available under CC-BY-SA unless otherwise noted.