Prince Charming was, as his surname suggests, a charming and suave individual who was immensely popular and enjoyed throwing parties to show off his wealth and status. He was married to Ella Charming and father to Mona and Tammie.

When Kay White starts his career in politics, he ends up reuniting with his old friend Prince Charming. Happy to see each other, Prince and Kay decide to throw a party at Kay's house to boost Kay's popularity in the polls. While at Kay's household, Prince flirts with Poppy, who ends up falling in love with him, much to Dorian's chagrin. However, at the party itself, Prince only dances with one girl for the entire evening - a girl named Ella. Poppy is upset to find that Prince loves Ella instead of her, but Poppy's mother Carabosse is adamant that Prince and Ella must be together, and instructs Poppy to help Prince find his true love. Poppy obliges, and Prince reunites with Ella, which results in the two getting married soon after. However, Prince is later killed by his former lovers Zurel and Gothel, who slip mermadic kelp into his drink. Prince, upon consuming his tainted beverage, unwittingly becomes a mermaid and rapidly dehydrates to death. 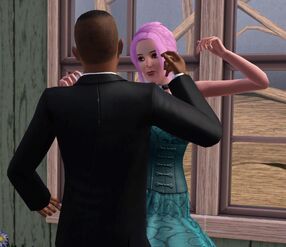 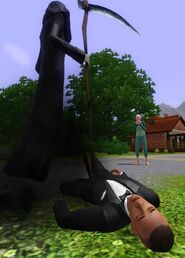 Prince dehydrates to death.
Add an image to this gallery

Retrieved from "https://sims.fandom.com/wiki/Fanon:Prince_Charming?oldid=787095"
Community content is available under CC-BY-SA unless otherwise noted.