Fanon article ownership
This fanon page was created and is owned by Mathetesalexandrou (talk). Unless the edit is constructive and/or minor (such as fixing a template), please do not edit this page unless given permission from the author.

Phthinophoria was actually a byproduct of an failed attempt at making artificial males: the Papal State already had some success in making artificial humans, if Kallistrata was truly made under Kallisto's grand schemes, and by the time of the Supernatural Revolution, the Papal State was very knowledgeable in the anatomy of female bodies, and thus was able to augment bodies at will, either cybernetically or supernaturally. However, the same couldn't be said of males, and despite numerous attempts at creating males, results were never optimal, although the Papal State was never noted to have a significant male population that suffer from deformities or disabilities. This led to some conspiracy theorists to believe that the Papacy discarded the failed projects ruthlessly, although no facilities were ever found in the Papal State to break down large amount of human organic matter.

Being disillusioned with a purely scientific approach, Kallisto saw promise in the supernatural, hearing rumors from the Silver Lily allies regarding potions that can create clones. As clones could be made from stocks unaffected by meddling, Kallisto believed it to be a perfect opportunity to increase the size of the male faithful. To that matter, Kallisto shipped a clone elixir to Sunset Valley, modifying it to reprogram the clone into Kallisto's designs. Esomena took the missive, and "bought" the elixir from the recently built temporary alchemic consignment store, using it on herself to test out the modified elixir. However, it ultimately failed on gender and appearance, and despite the failures of the project at raising male faithful, Kallisto found a silver lining in it imprinting skills to the clone. Hence the new artificial human was kept, and was enrolled by default to the Ecclesiarchal chapter.

From Filler to Important[edit | edit source]

"As we finally move to get ourselves some artificial male population that we desperately need, my attention shifts to the one created by the joining of science and metaphysical. What purpose does Phthinophoria serve? Currently, none: we already have plenty of human capital, and Phthinophoria requires much retuning and experience to reach full potential. Nonetheless, her creation does help in solving one problem: the lack of personnel to manage our most recent acquisition at Sunlit Tides. While Phthinophoria alone will not be able to manage it all on her own, but we can build more personnel. We have the technology, the capital, and will. We shall have Phthinophoria deployed to Sunlit Tides as soon as possible: we cannot afford a longer doldrum on the part of Sunlit Tides."

With that development, Phthinophoria said farewell to the Sunset Valley Chapter members, all of whom gave Phthinophoria a warm goodbye ceremony. Kallistrata already gave a short visit to the Town, establishing the Naos-Stratopedon for Phthinophoria to live on. In addition, Kallistrata left 2 Plumbots, Philopoimen and Antimachos to help Phthinophoria with the management of the facility as well as to assist in paying maintenance costs. The Naos-Stratopedon was located at the most remote spot, and it was only a matter of time before small-scale public buildings would pop up... 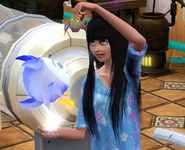 Even Ecclesiarchs have adorable moments.
Add an image to this gallery

Retrieved from "https://sims.fandom.com/wiki/Fanon:Phthinophoria_Eschateria?oldid=652161"
Community content is available under CC-BY-SA unless otherwise noted.