Olive Specter is a major recurring character in the StrangeTown Monty (STM) Machinima Series, and the title character of StrangeTown: Specter Yard Conspiracy (STSYC). She is the mysterious, old female recluse of Strangetown.

There are many rumors circulating around Strangetown about Ms Specter and her estate. Some insist Specter is an active practitioner of black magic. Others assert that those foolhardy enough to go to her estate (ominously named "13 Dead End Lane") never come out alive. Yet others say that this mysterious old woman maintains a growing collection of tombstones in her yard. At least they are supposedly faintly visible from the roofs of the Curious Observatory or Grunt Boot Camp, but nobody really knows for sure. After all, they might just be seeing what they want to see.

It MUST be more than a coincidence if all her husbands mysteriously die shortly after marriage. After many years, the gossip about the existence of a secret son proved to be true, as the young man Nick Grimm showed up just in time to inherit her ominous estate. Vidcund Curious delivered the report confirming that 23 of Nick Grimm's chromosomes came from Olive Specter. At one point, there were rumors that the other 23 may have come from Thanatos Grimm(1).

After Specter's death, the supposed cemetery is no longer visible from the roof of Curious Observatory. It is possible that some of Olive Specter's magic may have died together with her. But the Curious Brothers never mention this, as it is bad for their reputation as scientists to talk openly about magic. Yet PT9 & Jenny Smith continue to warn their children never to go to 13 Dead End Lane, much to the chagrin of their son, Johnny.

When Specter was still alive, she was scratching her head over the arrival of a young male recluse, who apparently has the same last name as one of her old neighbors who lived near her back in Midnight Hollow.

This new guy didn't appear to be affected by the rumors, as he built a home-sized lab next to her estate, bringing his 3 sports cars and a helicopter. While she never saw his face during daylight hours, she loitered around his property regularly. She even once secretly hoped that this young man is her long-lost son, but later found out that he is slightly too old for that.

Now if anyone is to find out the truth about Olive Specter, the best person to ask is Ophelia Nigmos, her teenage niece - the one person known to have continually survived walking in & out of 13 Dead End Lane. But the real question is about getting the girl to talk.

In the Football Universe, Olive Specter attended the 2015 Match to support her son, Nervous Subject.

Old Ms Specter may be deceased long before the 2035 Match, but her influence may possibly be very much alive...

Olive is the mastermind of operations behind Team Specter in the Battle of Strangetown. Will she lead her army to victory?

Olive is also the protagonist of STSYC Prequel: Olive Specter's Timeline, a chronicle of her various murders and relationship with Thanatos Grimm, the Grim Reaper.

(1) "Thanatos Grimm" is the name of the STM Grim Reaper, whom the author considers to be Specter's true husband. "Thanatos" is the Greek word for "death". Thanatos may have planted thoughts into Nervous Subject's head when he was choosing his new name. 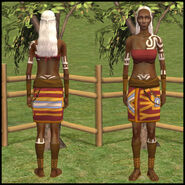 Olive Specter wearing the Exorcist Paranormal career outfit
Add an image to this gallery
Retrieved from "https://sims.fandom.com/wiki/Fanon:Olive_Specter_(STM)?oldid=844164"
Community content is available under CC-BY-SA unless otherwise noted.