Fanon article ownership
This fanon page was created and is owned by Tonymac36 (talk). Unless the edit is constructive and/or minor (such as fixing a template), please do not edit this page unless given permission from the author.

Norman Bates is an Young Adult Sim who resides in Sunset Valley with his mother Norma Bates. He has one aunt Emma Spool who he is estranged from.

Norman was born in Spoolville, a village in SimNation to Sam and Norma Bates. Nothing else is known about his childhood and he may have been a child of neglect due to his traits.

Norman grew up in a very abusive home. He became very attached to his mother, much to his father's dismay. Sam began picking on him, scaring him, and beating on him to get him deattached from his mother. Also witnessing his parents deteriorating marriage took its toll on him as well. His aunt Emma, who was not that much older than him, moved in and chaos soon erupted over the household. Even though his mother hated Emma, Norman liked her and they got along really well. When he reached his late childhood, his mother divorced his father, and they moved away leaving Spoolville and everyone behind.

Teenaged Norman and his mother arrived in Sunset Valley. Although very attached to his mother, Norman also longed to have a life of his own and to be in a long-lasting relationship with the woman of his dreams. However, he was very shy, and skinny, and was scared about every moving thing that comes his way. Although he dreaded it, he made it through his first couple of days at school. As his mother works at night, Norman has become somewhat independent and learning to do things on his own. When Norma went off on vacation, he suffered a mood swing and throwed eggs at the Keaton household, but was caught by the police and escorted home. He also has become good acquaintances with Ethan Bunch and has recently met his sister Lisa Bunch. After Norma returned home, Norman received news that his father passed away. Norman wanted to return to Spoolville to say goodbye, but Norma objected to the idea. After accepting that he wasn't going to say goodbye to his father, Norman decided to concentrate on his schoolwork, athleticism, and building a friendship with Ethan and Lisa. He became an honor student and even gain some pounds through exercising. Along the way he realized he had feelings for Lisa and after befriending her, he asked her to come over and tried to flirt with her. She turned him down letting him know she was in a relationship with VJ Alvi. Defeated a sad Norman started to watch TV to make him feel better, only to get worse after being frighten from watching TerrorTV. Norma tried to console him but he shouted at her to leave him alone, especially since he found out that his mother has a new boyfriend.... 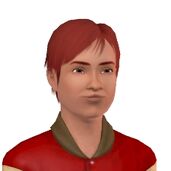 Norman as a teenager
Add an image to this gallery

Retrieved from "https://sims.fandom.com/wiki/Fanon:Norman_Bates?oldid=682051"
Community content is available under CC-BY-SA unless otherwise noted.