Nisha Neveah Slayer is a vampire and main protagonist in Of The Night and a minor character featured in The Good Ones. She is also the adopted daughter of Elvira Slayer. Her biological parents are two of the Grand Vampires from Downtown.

Nisha is artistic and creative. She like to paint and has many of her paintings hanging up in her room. She is a fun-loving, bright socialite who loves to be around people and make them laugh.

Nisha is quick to blame herself for unfortunate things that may not even be her fault. She cares deeply for her friends and is in constant fear of her them. This often leads to her detaching herself from them in order to protect them.

Nisha is also very just and believes in doing what is right. These beliefs usually contradict what her mother, Elvira, believes is right. This is probably why the two are in such a conflict which only leads to Nisha blaming herself more.

Nisha learned all her toddler skills from Elvira. After learning her skils, Nisha was alone most of the time while Elvira was either asleep during the day or hunting and partying at night.

As a child, Elvira took it upon herself to teach Nisha. The lessons went by quick and Nisha learned about things far past what her age were taught. Nisha found a certain fondness in painting and spent long hours painting pictures. She espically enjoyed pictures where lots of colors were blended together.

Nisha never left Elvira's property as a child. She only met vampires, Elvira would invite over, including the Talons. Erika's daughter, Jessica and Nisha would hang out in her room while Elvira, Erika and the other vampires partied. Nisha would beg Jessica to tell her what it was like outside Elvira's penthouse.

When Nisha was about 11 she pleaded with Elvira to let her attand public school. After much persauding, Elvira reluctantly agreed.

On her first day of school, Nisha first met Matilda Smart on the bus. The two girls got along great and both shared an interest in art. During class they met Michael Sleep and Brigit Hemlock and the four became insuperable.

Nisha learned from Brigit about a potion called Vamprocillin-D that could cure vampirism. When Nisha tried to convince Elvira to let her get some and become normal, a huge fight broke out between the two and they've barely spoken to each other since.

Most of Nisha's teenage life was a drag. Though she never lost her love for art and her friends.

During Nisha, Michael, Brigit and Matilda's senior year in high school, Matilda came up with the idea to go out into the city after curfew. During one of their outings Michael and Nisha shared each other's first kiss which was soon interrupted when the cops caught them. Nisha, Matilda, Brigit and Michael all made a run for and sought refuge in a dark ally near the Plasma 501. There heard screaming and stumbled upon an unconscious Flo-Flo Chique and a well-fed Vladimir Schlick. Brigit and Nisha sent Michael and Matilda away as they began to battle Vladimir. Just before Vladimir could finish the job, Elvira arrived and dismissed the dispute.

A week or so after that night, Nisha confronted Michael about the kissed and told him she felt nothing for him. Heartbroken, Michael left and Nisha ran out her house in frustration and hid behind the Plasma 501 and felt asleep. When she awoke she was overwhelmed by a monstrous hunger and attacked the closest living thing to her Lotta Greaves and killed her in the process. Nisha ran back to her house and was comforted by Elvira who finally told her the truth behind heritage.

After graduating High school, Nisha stopped fight her mother and allowed Elvira to take control of her life.

One evening, Elvira invited the Franks over. Their son, Sinjon Frank, gave Nisha a mysterious, vampire engagement ring. Sinjon then leave Nisha with the ring. Outraged, Nisha confronts Elvira and the two enter a huge argument. Nisha furiously runs to her room and escapes through a window and run away to Matilda's house and spends the night.

After arrangements are made, Nisha makes permanent residence at Matilda's house, much to her roommate's displeasure. Nisha tries to earn her keep of the house by cleaning and cooking, but continuously fails to do both well. Matilda convinces Nisha to get a job to make some money. Reluctantly, Nisha agrees and the two girls begin search for jobs. Finally, Nisha applies as stylist. She is accepted and find the job to her liking.

Sometime later, Brigit invites Nisha to her brother's wedding where Nisha meets her mother. She asks her mother for information on Sinjon Frank which her mother agrees to handover. Nisha, somewhat dazed, sits at the bar as the wedding begins. Local celebrity, Matthew Hamming, notices her and starts up a conversation. Wooed by Matthew's charm, Nisha follows Matthew as he gives her a tour of the Plasma 501. When they discover the wedding is over and everyone has left, Matthew and Nisha hang out in the lounge when Nisha realizes she is truly in love with Matthew.

Nisha is a Hindu name meaning "Night". This could only be reference to being a Vampire since everything else about her is light and bright. Neaveah is a Slavic name meaning "Butterfly" possibly referring to her Social Butterfly trait. 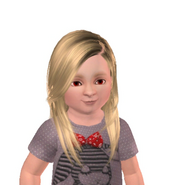 Nisha as a toddler. 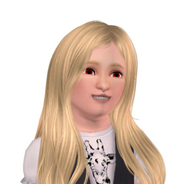 Nisha as a child. 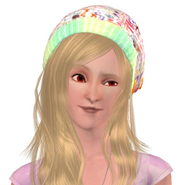 Nisha as a teen.
Add an image to this gallery
Retrieved from "https://sims.fandom.com/wiki/Fanon:Nisha_Slayer?oldid=893521"
Community content is available under CC-BY-SA unless otherwise noted.