The Sims Wiki
Register
Don't have an account?
Sign In
in: Fanon created and owned by C.Syde65, Completed fanon, Sims (fanon),
and 24 more

Nina Caliente is a well known resident in my player stories in The Sims 2 in Pleasantview. She is the daughter of the late Flamenco and Nighat Caliente, the elder twin sister of Dina Caliente, the auntie of Dylan Goth, the ex-girlfriend of Don Lothario and the girlfriend of Jestyn Leishman. Nina is voiced by Zoe Galvez and is 28 days from being an Elder.

When Nina and Dina first moved into Pleasantview, it was clear to the player that they were attempting to lay their hands on Mortimer Goth's fortune. Nina has long since moved on from her mooching days and has gone back to being just a heart-breaker again. The sisters are considerably wealthier than they were at the start of the game and they now have jobs. Nina became employed in the Service career starting as a Party DJ.

In my game it was ultimately revealed that Nina and Dina were not responsible for the Abduction of Mortimer's wife Bella, and some of my early sources indicate that Nina actually helped locate the place where Bella was hidden. Nina became one of the regular attendees of Darren Dreamer's house parties, despite Nina's initial dis-taste for Darren. Maybe Nina's just a natural Party Animal!

Nina has made many new friends since the start of the game. Her new friends include - her sister, Bella Goth, Cassandra Goth, Kaylynn Pleasant (née Langerak), Lilith Pleasant, Brandi Broke, Marisa Bendett, Goopy Letourneau (né Gilscarbo), Bunny Leishman and Jestyn Leishman. Nina and Cassandra met at one of Darren's Parties and their friendship was established on their own steam - without my help.

Nina's romantic relationship with the has-been Casanova Don Lothario ended when she caught him cheating with Dina. Nina's relationship with her sister did not suffer but both of them are no longer romantically involved with Don. Nina's relationship with my CAS Bunny went off to a rocky start but I was able to make them friends. Nina is romantically involved with Bunny's husband Jestyn without Bunny's knowledge. Sadly, Bunny has not found out about Jestyn's affair with Nina. But the good news is that the three of them remain in each other's good books. It's not easy being Married when you're a heart-breaker who is friends with a female who is also a heart-breaker. 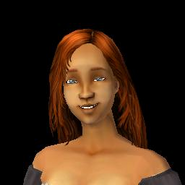