Fanon article ownership
This fanon page was created and is owned by Auror Andrachome (talk). Unless the edit is constructive and/or minor (such as fixing a template), please do not edit this page unless given permission from the author.

Niles Worth is the legacy founder and family patriarch of the Worth family. He died at the ripe old age of 82 days, and was married to Patricia Worth. With Patricia, Niles had three children. Those three children later went on to give Niles and Patricia six grandchildren.

Niles's predestined hobby was Arts & Crafts, however he had the most hobby enthusiasm for Music.

Life as an adult Edit

Fresh out of "CAS Town", Niles was ready to approach the world, find love, and get to the top of the Military career. When the traditional "Welcome Wagon" came to his home, Niles met Patricia Wan, Rose Greenman, Armando Cox, and Rose Greenman. That day, Niles met his one true love, and his one true hate. Armando and Niles quickly became enemies while things heated up between Patricia and Niles. During this time, Niles continued to climb the career ladder (he had become a Drill Instructor). As the seasons passed, Niles fell in love with Patricia (the feelings weren't exactly recuperated). Finally, one day, Niles got the nerve to ask Patricia to leave her friend Cleo Shikibu and move in with him. She said yes. Not long after that, Niles and Patricia made out with each other, Woohooed (the first time for both of them), and became BFFs[TS2:FT]. As if things couldn't get any better, Niles was promoted again and made §5,000. Niles again worked up the nerve to ask Patricia to move on to the next step: Marriage! Patricia (while pregnant) got married to Niles and joined the Worth family. They invited most of the neighborhood to the amazing wedding party they had and promptly went on a honeymoon.

Sometime after getting married, Niles decided to adopt a large dog named Maxx. The two of them got along famously. Not long after that, Luna Worth, a beautiful baby girl was birthed by Patricia. Niles and Patricia both longed for a big family, so it didn't take too long for Patricia to become pregnant again. Even then, Niles managed to focus on his career and find time to teach Luna a nursery rhyme he learned in his adolescence. The two of them became best friends very quickly. Soon, Luna grew up while Platinum and began elementary school. Meanwhile, Patricia gave birth to unplanned twin boys: Justy and Wes. In an effort to help Luna with school problems, Niles decided to teach her how to study. This allowed the two to become BFFs with one another. Now a husband, father, Flight Officer, and a very athletic man, Niles was granted access to the Platinum Gym[1] (the first of my Sims to do so!).

Meanwhile, his tutorship of Luna allowed her to get an A+ Report Card. Luna proudly showed her father her report card after coming home from school. This would be the first of many A+'s as Wes and Justy grew up into children not long after that.

Niles eventually decided that one pet (and the lag it caused) was not enough, and opted to get another pet: Cleo! However, Cleo was generally disliked among the Worth family. She rejected social interactions and fought with Maxx constantly. She eventually ran away, but was found by a ninja.

Luna finally broke away from childhood and became an outspoken teenage girl. Niles wasn't ready for this, but he managed. Like he tutored Luna, he taught Justy how to study, in order for him to get an A+ Report Card (which was eventually accomplished). Wes got an A+ Report a while after his brother Justy, meaning all three children managed to get excellent report cards. After a small period of time, Justy and Wes became teens (joining the soon-to-young-adult Luna). Now that all of his children could basically take care of themselves, Niles tried to focus on his career a bit more. It would only be a few days before he would become old.

Life as an elder Edit

Getting the job done Edit

Niles became an elder, but was still at level nine at the Military career (Astronaut). Looking at life at a new angle, Niles decided to move the Worth family to a bigger home: 102 Firefly Pass. After days and days of gruel and hark work, Niles became a General and fulfilled his lifetime want of becoming a general. With the money he earned, he was able to send all three of his children to Sim State University - something he was not able to do.

Niles met his first grandchild, Andromeda, a beautiful baby girl, then a baby boy, Comet. Because he was retired, he often took care of Andromeda and Comet while Justy and Trista went off to work. Seeing as they came this far, Niles and Patricia held a Golden Anniversary Party to celebrate the time they've spent with each other. The love they held for each other was still strong and burning well - even after all this time.

Niles heard the good news from spares about fortunate happenings and daily events; Luna and Wes both married their respective loves. From those unions gave Niles two more grandchildren to meet: Luke and Harold Worth. Meanwhile, at home base, Trista gave birth her third child, Harris! Niles made sure to meet and stay in contact with his fellow children and grandchildren. Because he was retired, he found ample time to spend with his grandchildren whom he lived with. He taught Andromeda how to both talk and walk. He quickly became best friends with Harris and Andromeda.

During retirement, Niles found another passion: Music. He had bought a viola several SimDays ago, but had yet to play it. However, he had the time now, so he played it whenever he wasn't cooing over his grandchildren. Eventually he was granted access to the "My Muse - Music & Dance Studio".

Time passes, and the Worth household is no exception to that. Andromeda and Comet sprouted into childhood. Meanwhile, Trista gave birth to her fourth child, Anna. Harris joined Andromeda and Comet as he became a child. Niles made sure to dote his grandchildren equally. Sure enough, Comet, Andromeda, and Harris all received A+ Report Cards.

Niles didn't take to Trista (his daughter-in-law) very well at first, but soon they became the best of friends. Niles often took the stress of the children off her which helped alleviate the relationship. Adding Trista and Anna as best friends allowed Niles to have ten best friends!

Niles missed a pet around to dote and take care of; Maxx was taken by Luna while Wes took Cleo. He mediated the problem by adopting a new pet: Cyromil. Interestingly, Cyromil is a small dog while Cleo and Maxx were large dogs. Perhaps Niles wanted something smaller to keep track of.

As a Popularity Sim, Niles enjoyed making friends and spreading his social network. He became best friends with his grandchild Comet and eventually made ten BFFs. Soon, Anna (the youngest of Generation three) became a child. Niles made sure to dote on her constantly. Soon, Andromeda and Comet became teens. His other grandchildren (Luke and Harold) became teens as well. A bit of time after that, Harris joined Comet and Andromeda and became a teenage boy. Eventually, all of Generation three left for college (except for Anna, who was still a child by this point).

Some time after they left, the Worth family received news that Harold had dropped out of college after missing his final exam. What a disappointment. Meanwhile, Andromeda and Comet both got engaged at college (as Generation Two had done). Soon, Andromeda, Comet, and Harris graduated Summa Cum Laude while Luke graduated (without honors). After the Worth family members came back from college, Andromeda and Harris moved out of the main Worth household to have families of their own and to make room for Generation Four. Soon, Comet Worth got married to his wife Kaylynn. It was not long after that Kaylynn became pregnant. Pregnancy arrived and went in a heartbeat and thus, Generation Four was born. Niles met his first great-grandchild Lucas. In the midst of this, Anna finally became a teenager.

At the ripe old age of 82 days, Niles died. He left behind a huge legacy and left Simoleons towards fourteen family members and friends. He is now buried near the pond at the edge of 102 Firefly Pass. 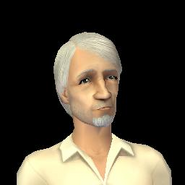 Retrieved from "https://sims.fandom.com/wiki/Fanon:Niles_Worth?oldid=820461"
Community content is available under CC-BY-SA unless otherwise noted.