Nikto Curious, for others also known as Tycho Curious, is the son of Pascal Curious and the first child of the Curious household. He has Pascal's blue eyes, but the rest of his appearance looks like his alien father Pollination Technician.

He married River and they got two children: Sarah and Kade.

When first playing with the Curious family Pascal is already pregnant with Nikto, but doesn't seem to be aware of this. He is focussed on his career and his biggest interest: science! He only has one friend Nervous Subject and has no experience in relationships at all. Pascal's and Nervous' friendship grows and they become inseparable.

Nikto has grown enough to start kicking and Pascal finally realizes that he is pregnant. He is excited to become a father of an interesting unknown creature. Nervous comes by more often and likes to take care of Pascal, who gets bigger and bigger every day. Slowly, Pascal realizes his feelings for Nervous and they kiss. Both confused they decide not to see each other for a while.

When Nikto is born, Pascal's brother Vidcund discovers that after his alien kidnapping he also got impregnated. This improves the relationship between Pascal and Vidcund, as they finally have something in common (besides their love for science of course).

As promised Nervous visits once again the Curious household, now sure of his love for Pascal. But when he arrives he is shocked by the looks of little Nikto, his green skin scares him. However true love never dies, so Pascal and Nervous stay together, but they decide Pascal will raise the boy on his own. Shortly after they WooHoo for the first time and not much later they got engaged.

In the last days of Nikto's babyhood his half-brother Klatu is born.

Nikto learns his toddler skills quite fast. Pascal teaches him to walk, talk and potty trained him close after each other, which makes them Best Friends and later BFF's. He learns the Nursery Rhyme and, shortly after that and right before turning into a child, his cousin Lucifer is born.

His child years went by fast, as school was really easy and he always got A's. This is the first time where his cousins are in the same lifestage as he is (although this already happened before with Klatu). He lost his aunt Crystal but they weren't so close. He felt bad for Lucifer because he lost his mother. When all three cousins were in the child fase, they got accepted into private school.

Nikto meets Nervous but doesn't seem to care so much about his and Pascal's relationship.

Nikto turns into a teen and chooses the knowledge aspiration, which makes sense as he loves to learn. His cousins grew up as teens as well, making them all be in the same life stage for the second time. He becomes friends with Marsha Loner (daughter of Ajay Loner) and shares his first kiss with her. However they both don't seem to be in love and Marsha likes his brother Klatu better, so they decide to be just friends. In the meantime, Pascal turns into an elder.

Nikto becomes friends with two boys: River Smith and Samuel Riley. When he sneaks out with Samuel he realizes that he is, just like his father, more interested in men than in women. Their date ends with a kiss. The next day Nikto invites River and their day also ends with a kiss, although he is better befriended with Samuel, he is more attracted to River.

When Nikto becomes an adult he immediately takes a job in the dance career. His brother Klatu grew up not much later and asked his girlfriend Marsha to move in with them. Because Klatu is only one day older Lucifer grew up the next day. With the three cousins now being adults Pascal, Vidcund and Lazlo decided to move out, so the cousins can start their own family in peace.

After the engagement of Klatu and Marsha, Nikto decides to ask River Smith to move in with them and they share their first WooHoo. When his brother got married, Nikto got inspired and proposed to River.

River discovers not much later that he is pregnant and Nikto is shocked, he looks more like his alien father than he thought. Tessa, the girlfriend of Lucifer is not surprised, as she is the result of a female impregnation. River doesn't mind and loves the idea of something growing inside him. Klatu is worried about the chance of getting another alien-like Sim in the family. Nikto realises his life is looking much like his father's and his forever during engagement with Nervous Subject so he suggest they should marry (or get a Joined Union). After their marriage their first child and daughter Sarah is born, a normal looking Sim. River is a little disappointed that she didn't inherited Nikto's beautiful green skincolour but loves his daughter not any less because of that.

Nikto's father Pascal calls him to tell him that he finally retired. Nikto is glad that his father is taking it easy. Unfortunately Pascal dies of old age just one day after his call. Nikto is saddened by this message but finds comfort with River.

This 'comfort' leads to another pregnancy for River and the birth of Kade Curious an alien looking Sim, born only three days before Nikto turns into an elder. Before the discovering of River's pregnancy Nikto also reaches the top of his career,fulfilling his lifetime want.

Nobody stays young forever and Nikto is no exception. When he turns into an elder he decides to store his ballet shoes and retires. This gives him more time to take care of Kade. When their children are all grown up Nikto decides together with River that it's time to move out and let them create their own lives. They move in with Klatu and Marsha and not much later Lucifer and Tessa follow their example.

Nikto is happy to see that Sarah found her real love as he witnessed the marriage between her and Jenson Beaker. He was also happy she took care of her younger brother Kade. She sent him to the university and Nikto heard he was doing well. Not long after Sarah's weddingday he heard that he was going to be a grandfather. Only short after Kade's graduation and marriage Nikto dies of old age. 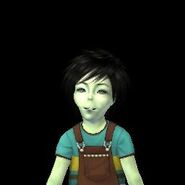 Nikto as a toddler. 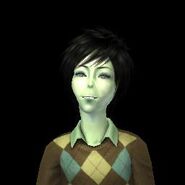 Nikto as a child. 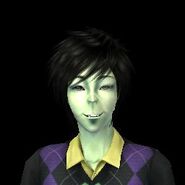 Nikto as a teen. 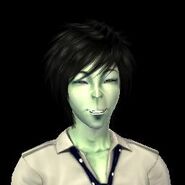 Nikto as an adult. 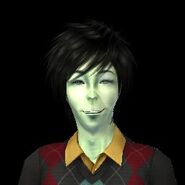 Nikto as an elder.
Add an image to this gallery
Retrieved from "https://sims.fandom.com/wiki/Fanon:Nikto_Curious?oldid=743002"
Community content is available under CC-BY-SA unless otherwise noted.