Fanon article ownership
This fanon page was created and is owned by Wikierzz1122 (talk). Unless the edit is constructive and/or minor (such as fixing a template), please do not edit this page unless given permission from the author.

Nikki Yang (born 25th December 1986), is a singer, rapper, actress, and model. She is a member of the Korean band SNSD, and a former member of the Japanese band BeForU. Nikki is of blood type O (Her biological father O, Norika B)

Nikki was born in South Korea. She moved to Tennessee, United States when she was an infant, because she was wanting to learn how to speak English, and change America, even though she wasn't able to speak at that time.

Nikki was very obsessed with Barbie dolls, wanting to possibly become like a Barbie doll. Nikki was infected by a Shy 'n' Cold virus from contact with a very introverted Princess named Dina Lawrence, making Nikki a very shy and cold person back then. Nikki was cured from the Shy 'n' Cold virus when she first appeared in 2001 in the TV Show Alice in Tennessee. She was first seen in 2001. Nikki has developed a huge crush on Lorenzo Gutierrez. Nikki became more open and was a very popular cheerleader and bookworm, due to the fact that her high popularity at high school is from Nikki joining BeForU in 2004.

Before Nikki's debut in Kimmy's Entertainment, Nikki was infected by a Shy 'n' Cold virus from contact with a very introverted Princess named Dina Lawrence, making Nikki a very shy and cold person back then. Nikki was cured from the Shy 'n' Cold virus when she first appeared in 2001 in the TV Show Alice in Tennessee. Nikki is now more optimistic and always smiling, giving her the nicknames 'Eye Smile Fairy'. Despite her being a Capricorn, Nikki gets emotional easily and can always tell when her songs are going to flop. Despite Nikki being the youngest sister of the 3 Yang sisters, Nikki doesn't want to be too much like Nellie, because Nikki knows that her voice is hoarse, but Nikki is called cute due to her 'Eye Smile' appearance. Nikki is shown to have a phobia of bugs but isn't shown to be scared of butterflies, caterpillars or ladybugs. It is because Nikki loves butterflies and is only not scared of non-poisonous bugs. She's still is disgusted of bugs like ants, though.

Nikki dresses very girly; mainly wearing pink and butterfly clothing, because she loves butterflies and wished to become a Fairy. Her outfit in The Sims Bustin' Out shows that she is of an Asian descendant.

In The Sims (console), Nikki wears a pink shirt with a blue butterfly, light blue hippie jeans and red sneakers.

Nikki's voice is very hoarse, making her unfortunately unable to reach high notes when singing. In some parodies, her voice can be very low pitched by altering her voice into an extremely low pitch.

If she appears in The Sims 2 as an adult, she will be voiced by Zoe Galvez.

In The Sims 3, she has Voice 1 in a higher pitch, despite her actual hoarse voice.

Her Japanese dub voice is supposed to be from former DDR and BeForU star Sayaka Minami.

Her Korean dub voice is supposed to be from SNSD star Tiffany.

Her Visit To The Sims Universe[edit | edit source]

One day, her boss and creator Rachel/Kimmy had a device that sends the whole 'Kimmy's Celebrities' to any video game universe that they would ever want to explore in person, so she decided that visiting a game universe would be fun. Her boss then decided to see what the Sims universe is like, by visiting and 'teleporting' to the Sims universe, where the main language of the Sims is Simlish. Nikki and the rest of Kimmy's employees at first could not understand what the Sims were talking about, or doing, but then, once they were 'stuck' in the Sims universe for now, the Kimmy's employees are now able to speak Simlish, even though Simlish is not any of the Kimmy's Corporation language. Nikki's native language is not Simlish.

Her Life In The Sims[edit | edit source]

Life Leading up to The Sims (console)[edit | edit source]

Nikki makes her first appearance in The Sims (console). She is 14 years old, although there is no exact age and teen life stage at this game. She lives with her relatives Natalie, Nellie, and maybe Betsy. She is friends with many people like her bandmates, Alice, and Sierra. She works in the Entertainment career. Nikki should enjoy reading books, due to the fact that Nikki wants to be a famous girly author when she grows up.

Life Leading up to The Sims Bustin' Out[edit | edit source]

Nikki is a marriageable candidate, as she can be married on marriageable places like Casa Caliente and Malcolm's Mansion. Her biography states that she is 16 years old, although there are no teens in this game. But there is a glitch if you play a child then evict them and turn them into an adult, they'll still go to work, but will not get paid, so if it happens to Nikki, it can be considered for her to go to high school. She lives with her relatives Nellie, Betsy, and Ruffles/JooLee. Her outfit reveals that she is of an Asian descendant. Nikki will least likely want to work in the Gangster career, because the Gangster career is too evil, as her alignment is on the good side.

Life Leading up to The Sims 3[edit | edit source]

In The Sims 3, her age ranges from 22-27 depending on the release date, making her a young adult. In Twinleaf Valley, she still lives at her sister Natalie's Inn on Natalie Street. Her life is a bit similar from previous games, except that she joins a different band, which is the Korean band.

Even though Nikki works as a celebrity, if the player wants to fulfill her lifetime wish, Nikki will have to quit her film job and work for becoming an author instead.

Nikki is a very famous singer and actress in the planet Topiah, and possibly in SimNation, such as France, and China. She has many fans, called "Sones" from being a member of SNSD. She has starred in some TV shows and films and sang many songs, but she prefers writing diaries, novels, and books. Nikki began dating 2PM Nickhyun on March 2014. The couple has rumored breaking up on May 2015.

As an Actress[edit | edit source]

Nikki was first seen in a 2001 episode on Alice in Tennessee. She then auditioned for Kimmy's Entertainment at the early 2004. She was accepted by the judges; The Creator, Rachel Thammavong, and Kimmy Thammavong. Nikki then appear more in a show called Alice in Tennessee. Nikki was also starring in another TV show called Jason in Tennessee by Lorenzo's debut as a huge fan of Lorenzo. She then made cameo appearances in TV Shows Fantage Show, and Pokemon Jr.. In the mid-2014, it was announced that Nikki will appear with former Fantagians together called 4 Cute Peeps.

As a Singer[edit | edit source]

The Sims Bustin' Out (without cheats)

The Sims Bustin' Out (with cheats)

A more clear picture of Nikki 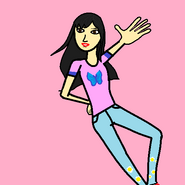 Nikki gets tickled by Natalie. LOL! Cute :)
Add an image to this gallery 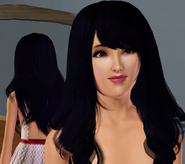 Nikki in The Sims CAS

Nikki is inspired and/or referenced by the following characters and people:

Retrieved from "https://sims.fandom.com/wiki/Fanon:Nikki_Yang?oldid=721310"
Community content is available under CC-BY-SA unless otherwise noted.