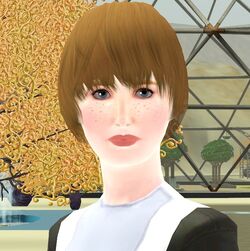 Nicole Elizabeth Blumenthal​ is a scientist and astrophysicist living in Lunar Lakes .  She lives with her partner, inventor Kelly DeWitt .

Nicole met her partner, Kelly, while both were researchers at the Perigee, Lunar Lakes' science building, which had been made from the crashed remains of the shuttle of the same name.  As female scientists, they quickly bonded.  Soon, they were dating.

While Kelly built her own private lab, Nicole continued to work at the Perigee under the tutelage of Christina Landgraab .

Retrieved from "https://sims.fandom.com/wiki/Fanon:Nicole_Blumenthal?oldid=781694"
Community content is available under CC-BY-SA unless otherwise noted.