Nancy Space is the second youngest in the family. She is the daughter of Amin and Atta and the sister of Kylie, Lupin, Flynn, Roger and Allen. She lost her memory to an evil warlock and now does not remember who she was.

Before Nancy was born, Amin and Atta lived a poor life as they came from a foreign land. Although Atta's mother was a normal sim, she didn't show any normal genes. One day, someone became interested in Amin and Atta's green skin and offered them a modeling job for a new green range of clothes. Suddenly everything changed for them. They were rich and in demand all the time. After a few years, they took early retirement and settled down.

As a baby, Nancy was thoroughly resented by her older brother, Roger but loved by her older sister Flynn. She didn't really know Kylie or Lupin but met them a few times when she attended Kylie's wedding as a baby but didn't remember any of it.

As a toddler, Nancy felt life was bliss (except for Roger) but was about to be in for a shock when her new sibling came... Things weren't as bad as Nancy had thought it was. Allen was sweet and just little and Nancy loved him. She thought he was the cutest thing ever. Sadly, a shock came just before she grew up. Her dad died which made her rowdy and grew up badly.

As a child, Nancy changed from a sweet calm little toddler into a rebellious little girl who would never obey anybody especially not Roger. Atta knew it was something to do with Amin's death but wished Nancy would tell her herself rather than Atta having to assume.

As a teen, another tragedy struck. Atta Died. This meant Nancy and Allen had to go and live with the most reliable relative and that was Kylie. Nancy was angry that she had to stay with her sister as she felt belittled and silly. She felt that she could take care of herself so one day, Nancy ran away from home... Life on the streets was not like Nancy imagined. She thought that after a few days, a modeling agent would spot and she'd be whisked off to a life of fame and fortune and rub it in her family's face but instead it had been a week and she was cold and she just wanted to go home. While on the streets she caught the eye of frequent runaway Seth Takitani. He was immediately attracted to her and she immediately liked him. After talking fro a bit, Seth explained him and his family were under threat from the law and they'd need a good lawyer to get out of the crimes. This is when Nancy decided to help Seth by going home and going to college to be a lawyer as she was old enough.

As a Young Adult, She went to Academie Le Tour determined to help the Takitani Family get out of their crimes. She moved into an expensive residence with two other people, Bruce Kruvier and Lacey Stepney. Bruce was studying Medicine and Lacey was studying Art. Nancy quickly bonded with them both and they became friends with her. She got the feeling Bruce secretly liked her but she was still hooked on the mysterious Seth. One day, in Senior year, she heard a knock on her Bedroom window. It was Seth. He climbed in after she let him in and told her that his grandmother had died recently and now he was alone and he needed help or he'd be arrested for sure. He was in a bad state so Nancy put him to bed on the sofa in her room and went back to bed. She was now determined to help him even more. She payed for Seth to have a small apartment in Palm Tree Tides until she graduated. She finally graduated with Summa Cum Laude and wished her Dad could've been there to see it. 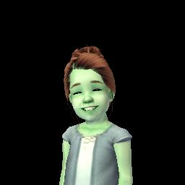 Nancy Space as a Toddler. 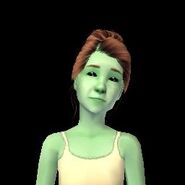 Nancy Space as a Child. 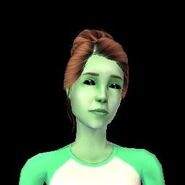 Nancy Space as a Teen. 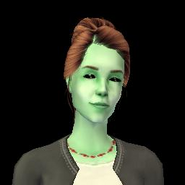 Nancy Space as a Young Adult.

Nancy Kruvier in Sims 4
Add an image to this gallery
Retrieved from "https://sims.fandom.com/wiki/Fanon:Nancy_Kruvier?oldid=674078"
Community content is available under CC-BY-SA unless otherwise noted.