Mortimer Goth is a well known resident in my player stories in The Sims 2 in Pleasantview. He is the son of the late Gunther and Cornelia Goth, the husband of Bella Goth and the father of Cassandra and Alexander Goth. Mortimer is on his 5th day as an Elder. When he was an Adult, he was voiced by Stephen Kearin.

In The Sims 2, it is clearly obvious that Dina Caliente had the best chance of becoming Mortimer's next wife. I actually did consider pairing him up with her. But when I found out how to work BoolProp testingcheatsenabled and bring Bella back, I decided to reunite Bella and Mortimer, leaving Alexander to start a relationship with Dina in his father's place.

In the first draft of my Sims 2 gameplay story, Mortimer actually did end up marrying Dina. By the time Bella Goth was brought back, Mortimer had already died. Even though I have now written Mortimer and Dina's romance out, so that Mortimer could reunite with his long lost wife, they still had a child - Dylan Goth. Their son lives with Nina and Dina but he has the Goth family name. However, in my game all the Bachelors, Calientes, Crumplebottoms and Dreamers are considered to be part of the "merged" Goth family.

Mortimer Goth, like all first created playable Sims has been notably shoving Sims who have spied on him through their telescopes while trying to build their logic skills. One of my CAS Sims' sons named Rifle Starker got shoved by Mortimer Goth. I initially thought that Mortimer was there on his own accord because he hated Rifle.

After several years had passed since Mortimer had retired in luxury, he decided to come out of retirement to resume his job as Mad Scientist. Even though Mortimer had black hair when he was young, he has genetics for brown hair meaning that he may have dyed it. This could just be a mistake by the developers. Mortimer's son Dylan, despite having black hair has dominant genetics for brown hair. 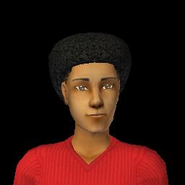 Mortimer's son Dylan.
Add an image to this gallery

Retrieved from "https://sims.fandom.com/wiki/Fanon:Mortimer_Goth_(C.Syde)?oldid=818288"
Community content is available under CC-BY-SA unless otherwise noted.