Miranda is considerably younger than her pre-made counterpart. She started off as a Teenager with 13 days from being an Adult. In my player stories Miranda is 23 days from being an Adult, which makes her younger than Hal and Desdemona. The reason why I decided to change their birth orders is because Albany's Memories state that Hal and Desdemona were born before Miranda. Their NIDs also state that they were created first. Although Goneril's memories state otherwise, I still decided to change their birth orders. Miranda's grandfather's memories state that she was born before her cousins Juliette, Hermia and Tybalt. While Consort's memories seem to be the most accurate, I felt that they did not accurately represent the birth order of his grandchildren, so I disregarded these memories.

Miranda, her sisters and brother and their parents had just moved into a house in Veronaville. Whatever funds they had left, it was nothing to how Miranda's parents were feeling about life. As far as Albany was concerned, he needed to leave Goneril and find true love. Albany was granted custody of Hal; and Goneril - Desdemona, Miranda and Ariel. So Albany and Hal moved out into another house where they were given $20,000 simoleons rather than taking 50% of Goneril's. Tellingly Albany and Goneril had not been divorced, only separated.

A few days later Miranda's father met a Sim I made named Ella Carr who was ultimately revealed to be the girl of Albany's dreams. But he didn't like the idea of cheating. Albany was just about to consider breaking up with Goneril when he had been given another reason to end their "marriage". Desdemona told their father that Goneril was having an affair with another Sim. Even though Goneril didn't truly love Albany, she was still heartbroken when he ended their marriage. Miranda was very upset when her parents broke up. While she secretly admitted that Goneril deserved what she'd got, she was probably more sympathetic about it than Desdemona.

A couple of days later Albany proposed to his girlfriend Ella and she accepted. It was during this time that they adopted a daughter named Cody Buckland who had been taken away from her neglecting parents. Miranda's father's wedding was blissfully happy and he, Ella, Hal and Cody had their surnames changed to Capulet while still being under the same tree as the Capp family. Miranda is now employed in the Service Career. She and her sisters are A+ students and are enrolled in Private school. Miranda, her sisters and mother are currently living in 95 Bard Boulevard. Her father, brother, stepmother and adopted half-sister are living in Capulet Mansion Major - a mansion I'd built to resemble 165 Sim Lane. Albany his wife Ella have had another daughter - Joanna who is Miranda's half-sister.

A few months later Miranda found the perfect opportunity to pursue her romantic feelings for her crush Mercutio Monty without being turned down. Mercutio had recently lost Hermia because she left him for Puck Summerdream. Mercutio reciprocated the crush that Miranda had on him and they went Steady not long after that. As the Capp / Monty feud was coming to an end, Goneril's hatred for the Montys dissolved enough to realise how much she fancied Antonio. When Antonio realised that Goneril now fancied him, he just couldn't resist the temptation to return her romantic feelings. They fell in love, and in seven months time they got married. Miranda and her family were joined by Antonio and his children Beatrice and Benedick - now Miranda's adoptive half-siblings. Beatrice and Benedick weren't present at the private wedding because they weren't officially members of the household yet. As a follow up of Goneril and Antonio's successful Marriage, they decided to have a child together - Magnus Monty. 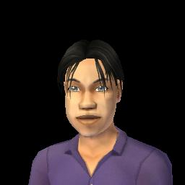 Miranda's acquaintance Orlando.
Add an image to this gallery

Retrieved from "https://sims.fandom.com/wiki/Fanon:Miranda_Capp_(C.Syde)?oldid=818409"
Community content is available under CC-BY-SA unless otherwise noted.