Mikhaela Rogers is sim introduced and featured in A Sim's Tale: Book 4 as the central antagonist for the first half of the story.

She was once had a romantic relationship with the protagonist Bryan Schmidt, however, their relationship ended after she caught cheating and pregnant with someone else. She used to had a child, but the child was dead due to miscarriage.

Starting from "Chapter 17: Jealously", Mikhaela became an enemy of Christine Redfield due to jealously as the latter seemingly had close relationship with Bryan.

Mikhaela and Bryan were dating once. However, unknown to Bryan, Mikhaela was cheating with someone else. After many long times hiding this secret, Bryan finally caught Mikhaela cheating after he found that she pregnant. Their relationship ended with tragedy.

Things didn't end well for Mikhaela. At some points, Mikhaela's unborn child was died due to miscarriage.

Found herself still in love with Bryan, Mikhaela decided to left her hometown to search for him.

Mikhaela discovered that Bryan was moving in to Pleasantview (formerly known as Sunset Valley) and decided to move there. Mikhaela contacted her friend and asking about Bryan, however, her friend didn't know about him and she got the information from Nathaniel Delgado instead.

With this information, Mikhaela promptly went to Bryan's apartment where she finally reunited with him. She asked Bryan to rekindled their relationship but Bryan rejected. However, Mikhaela wouldn't give up, stating that she would return to meet him again.

Soon, Mikhaela would caught Bryan hanging out with Christine at the Green Plaza. In a day later, Mikhaela eventually confronted Christine, accusing her for "stealing" Bryan. Mikhaela furiously attacked Christine, but stopped by Bryan who just passing by. Mikhaela gone mad after Bryan accused her for attacking Christine, stating that now she hated both Bryan and Christine.

A week later, Mikhaela hired two criminals to help her kidnap Christine as act of revenge, claiming that she would made Christine suffer for "stealing" Bryan from her.

However, Bryan, alongside Nathaniel and Daniel managed to locate where Mikhaela and the criminals hold Christine.

Mikhaela attempted to shot Bryan but failed thanks to Christine's act. She then about to ran away, only to found that she was surrounded by the police summoned by Nathaniel and Daniel.

At the end, the desperate Mikhaela and her hired criminals were sent to the prison by the police. Mikhaela however, was transferred to an asylum due to her family's request. 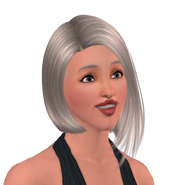 Retrieved from "https://sims.fandom.com/wiki/Fanon:Mikhaela_Rogers?oldid=844768"
Community content is available under CC-BY-SA unless otherwise noted.