Michelle Williams is a Sim who resides in Riverview.

Grace's pregnancy with Michelle was bad. She was sad and heartbroken that Bryce had died. Grace woke up on Week 3, Day 3, and could feel the baby coming. She had to drive in a blizzard in order to get to the hospital and give birth to Michelle. Michelle was born with the Grumpy and Neurotic traits, and these were not chosen due to her bad pregnancy.

During her infancy, her mom dated Greg Chelsea and got pregnant with his baby. On her toddler birthday, Grace gave birth to Susie, who would be her half-sister. She attended her uncle's graduation from high school. After her uncle graduated from University and her maternal grandparents aged up, her mom, step-dad, sister, and uncle moved to a new house and she had one day until she aged to child.

Michelle gained the Couch Potato trait when she aged up. After her birthday, Michelle started going to school. Her mother's fiance Greg had began to show his mean side. He would yell at Michelle for the smallest of things and spent most of his time working or painting and not taking care of his daughter and step-daughter. Grace and Greg started fighting and ended up divorcing. Michelle became sad for this and thought it was her fault that her mom's relationship failed, and that she lost the only father figure she had growing up.

Michelle was also very independent since she was older. She often did things for herself while her mom would take care of Susie.

Susie and Michelle were very close as children, even though their personalities were different. Michelle was more of a tomboy and Susie was very girly. They would play in the backyard or park together. Susie and Michelle even had a treehouse and would sleep in it. They also played on the seesaw and water slide. Her mom got pregnant also! Michelle left elementary school with an A.

On Michelle's teen birthday, she gained the trait Rebellious. While she was celebrating, her mom went into labor and gave birth to her younger half-brother Sawyer. When she became a teen, her mom got married to Arthur Dean. She began to wonder about her real dad that she never met because he died before she was born. She began lashing out and getting in trouble and was upset that she was robbed of a father and didn't get along with Arthur. The only thing they had in common was that they liked to play video games.

She pulled several pranks on her extended family members, but not just putting a whoopie cushion on the sofa. She would egg their houses, set flaming bags on their porches, and doorbell ditch them. Her mom got pregnant again and gave birth to twins, Colby and Ashli. Soon she would do pranks at school, get bad grades, and get in huge trouble. She felt like her mom and step-dad only wanted to ground her and were so strict. She began dating Lawrence Lum as well. She ended high school with a D.

Upon aging, Michelle got the Dislikes children trait. Michelle moved out immediately after aging to Young Adult with her boyfriend Lawrence as she was tired of her mom grounding her. She got a part-time job at the mausoleum. 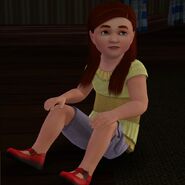 Susie and Michelle in their room at their grandparents house.

At her uncle George's graduation.

Michelle talking to her great-grandfather Norman.

Greg being mean to Michelle.

Susie and Michelle spin on the skating rink at summer festival.

Susie and Michelle have a water balloon fight at summer festival.

Susie and Michelle eat together at the summer festival.

Susie and Michelle play on the SeeSaw

This picture perfectly shows the difference between Michelle and Susie's personality.

Having a mood swing.

At her mom's wedding.

Watching her mom cutting the cake.

Laughing at her pranks.

Michelle gets in trouble for pranking her relatives.

STOP TALKING TO YOUR IMAGINARY FRIEND! YOU REALIZE IT'S NOT REAL, RIGHT?

At Susie's bachelorette party.
Add an image to this gallery
Retrieved from "https://sims.fandom.com/wiki/Fanon:Michelle_Williams?oldid=894706"
Community content is available under CC-BY-SA unless otherwise noted.