Fanon article ownership
This fanon page was created and is owned by DutchlishSim (talk). Unless the edit is constructive and/or minor (such as fixing a template), please do not edit this page unless given permission from the author.

Michelle Fischer (née Kosmokos) is the ex-wife of Simon Fischer and the mother of Elijah Fischer. She also haves a child out of wedlock with Julien Cooke. His name is Carl Fischer. Michelle will never know her grandchildren because she's dead.

There isn't much known about Michelle's earlier life in Desiderata Valley. She possibly has occurred a psychological trauma in her childhood that caused her disorder. As an adult she worked in the business career.

Michelle met her co-worker Simon Fischer, a new inhabitant of Desiderata Valley. Simon and Michelle got in love with each other and Simon proposed her to marry. However, Michelle never wanted to marry. But she didn't want to hurt him so she agreed. After the marriage Michelle discovered she was pregnant. She quitted her job to rest during her pregnancy. Actually, Michelle didn't rest, but she invited Sims to came over. Then she started an affair with 3 Sims. The Sims in question are Julien Cooke, Patrick Das and Sharon Wirth. Although, she felt quilty about her deeds, she still continued. After the birth of her son Elijah Michelle made a big mistake. Simon invited some co-workers at home, including Patrick. When he went outside to said a co-worker goodbye, Michelle kissed Patrick. Simon entered the house again and he caught his wive. Michelle confessed she cheated him with 3 Sims. Her relationship with Simon was over.

Michelle discovered she was pregnant. Only Julien could be the father because he was her latest woohoo. Michelle was homeless so she decided to live with Julien, the father of her future child. However, Julien was already engaged! But Michelle may live with him until the wedding. Carla Reamon, Juliens fiancée, wasn't happy with this. Michelle told everything about her relationship with Julien to Carla and the two women got into a fight. Michelle was furious and she pushed Carla in the pool. Then she tried to drown her. Fortunately, Julien could save Carla in time. However, Michelle didn't remember anything about her murder attempt. Also, Michelle never knew when she turned in a vampire. Michelle didn't pay much attention to her black-outs and she tried to live further. But she got more and more black-outs and everytime she did horrible things she couldn't remember. One time she turned Carla into a vampire. She deliberately didn't tell Carla about the sunlight and Carla burned. After she realised what she had done, Michelle ran away with her newborn son Carl.

She bought 290 Hobby Drive and renovated the house into a gothic house without windows. Life was harsh for the single vampiremom. When Michelle hid her in her coffin, there was a nanny who took care of Carl. But Michelle needed money for the nanny so she accepted several night jobs. When she was at work she als had to hire a nanny. When Carl turns into a child, Michelle realise that this wasn't the way. So, she asked the nanny Willow Darga to move in with her. Willow must take care of Carl while Michelle was hidding for the sun. Michelle doesn't pay Willow, but she got a free house (Michelle's house).

Michelle no longer sufferd from black-outs and Michelle regretted her deeds. So, she used a Resurrect-O-Nomitron to resurrect Carla. Michelle hasn't enough money so Carla returned as a zombie-vampire. Carla was afraid of Michelle and ran away. Meanwhile, Carl wanted to know who was his father. Michelle told it was Julien who finally married Carla. Carl got in touch with his father and they worked on their father-son relationship. However, Julien told Carl every bad thing about Michelle.

Michelle was wandering in Desiderata Valley and she met her ex-husband Simon. Their love wasn't extinguished and she woohoo'ed him in Simons hot tub.

Carl became a teenager and Willow was no longer needed. Michelle said that to her but Willow wanted to stay. The two women got into a fight a Michelle bit Willow. Michelle was really angry and she also turned her own son into a vampire. Carl confronted his mother with the facts about her. They also got into a fight. Carl was ashamed of his mother. He ran away, turned his girlfriend into a vampire and they moved to Fear Valley. The night was at his end and there began another problem. There was one coffin for two vampires. Michelle and Willow got into fight again. Willow drops Michelle out of the house. When the sun appeared Michelle didn't remember anything of last night. But it was too late. Michelle burned and only the ashes remained.

After Michelle's death the Sims of Desiderata Valley took some steps. Michelle's family and every supernatural creature was banished. Michelle is buried in a tomb in Fear Valley. She'll never meet her grandchildren.

Michelle suffers from DID (Dissociative Identity Disorder). It's someone who has two or more different personalities. The cause of this disorder is possibly a psychological trauma. Michelle possibly had a trauma from her childhood but it's unknown what kind of trauma.

The original Michelle is a nice but flirty woman. She likes men but she wouldn't hurt them. There's also a bad Michelle. This Michelle is a merciless woman and ruined the lives of other Sims. 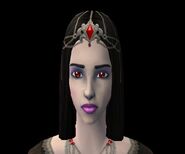 Add an image to this gallery
Retrieved from "https://sims.fandom.com/wiki/Fanon:Michelle_Fischer?oldid=672712"
Community content is available under CC-BY-SA unless otherwise noted.