The Sims Wiki
Register
Don't have an account?
Sign In
in: Fanon created and owned by WayfinderOwl, Completed fanon, Sims (fanon),
and 24 more

Fanon of Preexisting Sim
This page is about a preexisting Sim in a fanon setting. This article should not be treated as an canon article. For information about the canon Sim, visit here: Michael Bachelor

Not to be confused with Michael Bachelor.

Michael is the son of Jocasta and Simis Bachelor, brother of Bella Goth, uncle of Cassandra Goth and Alexander Goth, great-uncle of Aria Goth and Edgar Goth, romantic interest of Lolita Goth.

Michael is clean shaven, with his hair combed back. He wears comfortable clothes, that don't restrict him during a work out. All of his clothes are either blue or green.

Michael had a normal childhood. Nothing out of the ordinary happened, until the Bachelors were caught up in a scam that caused them to lose their home. They moved in with the Goths. During his teenhood, he spent most of his time either studying or swimming or working out. Some nights he saw the ghost of a beautiful woman, Lolita Goth. No other girl caught his eye.

Michael followed a dream, and joined the military. With his strong work ethic, he rose to the ranks to sergeant. He spent most of his night waiting for Lolita to rise from her grave in spirit form. Some nights she came, some she didn't.

Just after Bella aged into a young adult, his father Simis passed away. The pain of grieving was delayed momentarily, when Bella announced that Mortimer had proposed to her. Michael cried his eyes out at the wedding. Seeing his little sister looking so beautiful in her wedding gown, marrying the love of her life, made him so happy. Even though Michael wasn't that close to Gunther Goth, he was still sad when Gunther past away. The emotional whiplash continued, with joy when Bella announced her pregnancy. Sadness again, when his mother Jocasta passed away. Happiness when Cassandra was born. Sadness when Cornelia passed.

Michael was shot in the line of duty, and was forced to retire with honour. The local police force offered him a job within their ranks, because they had heard of his exploits. He was more than happy to accept the job. Making sure to buckle down with work, and becoming friends with his partner, the promotions rolled in.

A part of him envied Bella, because she had found love. He longed to be with Lolita, but she refused to go to the science lab to take the chance of coming back to the world of the living. She felt too distanced from the mortal realm.

Michael spent a lot of his free time taking care of Cassandra, because Bella had distanced herself from her daughter.

The job that he wanted from the moment he joined the law enforcement career, Vice Squad. He met the new guy on the force, Adrian Gardener. Michael gained a reputation for being the greatest detective on the force. All of the best cases came in quickly.

Once again Michael made a request to Lolita to go to the science facility. Alas she refused once more.

Bella announced she was pregnant once more. Michael was very happy for her. He could not help thinking about how his mother and father would feel, if they were alive. At Cassandra's birthday party, Bella went into labour. Michael watched over the party, so Mortimer could rush Bella to the hospital. When they returned, they brought with them his new nephew, Alexander.

For days he did not see much of Lolita. Even when he did, she was distant like she was trying to tell him something. He realised what it was, when Agnes passed away, and Lolita visited him that night to comfort him.

Michael decided that it was now or never. He wanted to be with Lolita. He made a bad taste joke that if she wouldn't join the world of the living, he would join the world of the dead. To make sure he remained alive, Lolita agreed to go to the science lab, to give them one proper day together, where they could have a proper date.

In his career, he reached the level of Tripple Agent, but it meant nothing to him anymore.

Michael decided it was time to hang up the badge. He retired from the force. When Cassandra got serious about one of his colleagues, Adrian, he gave up his room. Better Cassandra has it, than him. He wanders around the house day after day, going through the motions, waiting to die so he can be with his one true love.

He became a great-uncle when Aria was born. He was the only one that did not have a problem with Aria being born out of wedlock. Just like the rest of the family, he was unaware of Cassandra and Adrian's secret marriage.

Michael was present at Alexander's wedding, but played no part in the drama that enfolded.

Michael died of old age, while only his sister Bella was home. His sister sobbed, watching him depart. His grave was placed beside Lolita's in the family graveyard, so they could finally spend all of eternity together. 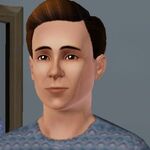