Micah Jett is a Sim who resides in Riverview.

Micah Jett is the son of Nathaniel and Carmen Jett and older brother of Christine Jett. He lived in a different town up until he was a teenager.

Micah and his family moved to Riverview after Micah aged to teen. Micah met his neighbor who was his age across the street named Sawyer Dean. They became friends and later, Sawyer asked him on a date to the Fall Festival. Their second date was at the pool, where they had their first kiss and became a couple. Later, they went to prom together. Micah learned that Sawyer was really into writing and wanted to become a writer or journalist in the future, which Micah thought was cool. Micah was a nerdy computer guy, and liked to collect comic books.

Micah gained the Lucky trait upon aging up. He graduated from high school and won Class Clown. He is preparing to go to university with Sawyer, where they plan to be dorm mates together. He majored in Technology. Before they left for college, Sawyer took Micah out on a date and proposed marriage to him promising that they would get married after graduation. His sister Christine began dating Colby Dean, Sawyer's younger brother.

They got their dorm room together and had lots of fun at university. Sawyer did more jock social group things and played collegiate volleyball and also spent time at the gym and bowling ring, while Micah was more of a nerd, who reached up the nerd social group by playing lots of video games and becoming a comic book enthusiast. He got to choose another trait upon reaching a high level, which was the Workaholic trait.

Sawyer going on a date with Micah at the fall festival.

On a date at the pool, they had their first kiss. 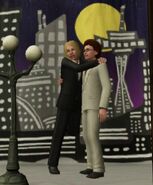 Sawyer and Micah at prom.

Sawyer and Micah kissing on a date.

Micah kisses Sawyer on his bed.

Skating and holding hands with the bae.

Micah Jett, will you marry me?

Watching the stars with Micah.

At the Comic book store.
Add an image to this gallery
Retrieved from "https://sims.fandom.com/wiki/Fanon:Micah_Jett?oldid=897726"
Community content is available under CC-BY-SA unless otherwise noted.