The Grim Messenger of Doom Triton is a playable resident in my player stories in The Sims 2 in my custom neighbourhood Washdowncreek. He is the sidekick of the megalomaniac Doctor Agent J. Triton, the colleague of Gothic Agent Triton, the roommate of Batwoman Triton and Helena Triton, the descendant of the Grim Reaper and the distant relative of Nerville and Dwight Specter. M.o.D is voiced by Stephen Kearin and is 29 days from being an Elder.

I created the Messenger of Doom to be a playable version of the Grim Reaper. While he is canonically a descendant of the Grim Reaper, it is unknown what their relation is. There are some differences between the Grim Reaper and M.o.D. Grim Reaper has the Zodiac sign Cancer and the Fortune Aspiration while M.o.D. had the zodiac sign Sagittarius and the Knowledge Aspiration. The Grim Reaper only wears a pink Hawaiian lei when he comes to take away a dying Elder Sim whose aspiration level is gold or platinum. M.o.D is always seen wearing the Hawaiian lei. It is understandable why M.o.D aspired to Knowledge, rather than following in the Grim Reaper's footsteps. M.o.D works in the Criminal Career as a Bookie.

When it comes to his personality, M.o.D doesn't appear to be as intelligent as his ringleader Dr. Agent J. while he is not necessarily stupid. He is also rather spineless which probably explains why he even has a ringleader. M.o.D is rarely known to make big mistakes, but he does tend to make a consistent amount of minor mistakes - such as burning Toaster Pastry. He certainly doesn't appear to be as capable as his slave Batwoman. This is rather odd considering that M.o.D is the one with the Knowledge Aspiration. M.o.D is currently in a Romantic Relationship with my CAS Hula Zombie even though they appear to be complete opposites.

Interestingly there have been two versions of the Messenger of Doom, much like there have been two versions of Skip Broke etc. When I created the first version of M.o.D. in late December 2011 I didn't care what his appearance looked like underneath. As time went on, I grew unhappy with his facial structure as it looked nothing like the Grim Reaper. After all M.o.D can only wear the Grim Reaper costume as an everyday outfit. So in November 2012 I deleted the original M.o.D and created a new one - creating a facial structure that was similar enough to the Grim Reaper's head, so he would look enough like the Grim Reaper even without the Grim Reaper costume. I made sure that the new M.o.D had the same Interests, personality points, skill points, aspiration, fitness level and even the same voice actor as the original. The original M.o.D.'s natural hair colour was blonde, while this new M.o.D.'s natural hair colour is black. 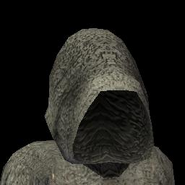 Retrieved from "https://sims.fandom.com/wiki/Fanon:Messenger_of_Doom_Triton?oldid=818292"
Community content is available under CC-BY-SA unless otherwise noted.