Matthew Saint was created by Starmoonie. Matthew isn't all that evil, he just holds a grudge with the Goths like his family has always have. Matthew also has the charm in his blood to charm the socks of a Sim quickly, thus making him excel in Politics. He is disgusted by his neighbors for being to "Rowdy" and hopes they will change their taste in clothing and pick of spouses.

As soon as Matthew was born his parents knew he was going to take over the fortune instead of his lazy brother. Matthew at first didn't seem to understand his family's hate towards their enemies, but he just went along with it until he actually met their heir. He was grumpy due to school work and random studying for fun, he really didn't have time for some fun until Katherine came along. This showed Matthew was going to grow up and be a workaholic like his parents, which wasn't going to stand well with his future wife.

Son of a hard-working gentleman, Matthew couldn't stand that his aunt and cousin were living with them because his aunt was such a greedy mooch and couldn't live without her older sister's help. He soon became enemies with his cousin and his oldest brother. Getting good grades at school and trying to maintain a friendship with the only Sim who would even dare talk to him, Kathy. Thus when they became teens, it was hard to win her affections because he knew she loved Mortimer. After the awkward teen years, everything turned when poor Kathy found out Mortimer married that Good (Called Horrible), Bella.

It was his chance to pursue his dream of marrying the beautiful Katherine. There were many men who chased after her but since she was friends with Matt, she gave him a chance. Soon after so many dates, the two were engaged, married, and had their first child.

Life in The Sims[edit | edit source]

Matthew is the neighborhood "Watch Dog" and likes to spy on his neighbors. He doesn't hesitate to give lectures to those who disobey the laws of the town. He pays very little attention to Kelis and seems to always argue with the Goths. Matthew's hobbies are Lecturing others, painting, spying through the telescope and debating about politics.

Kelis sometimes tried to get along with her mean father but with no success, he was not the type to actually want to spend time with a child. Matthew only played a little part in raising Kelis but spent his time mostly working. After Sunset Valley was changed into Pleasantview, he spent a large amount of time arguing and fixing up whatever Daniel Pleasant's father messed up. Katherine then wanted another child after things cooled down with change and Matthew gave in to shut her up. Soon Nadia was born and this actually made him a bit happy to see a new face who wasn't a Goth, even though now he can't stand her taste in clothes.

Senator and not-so-much dedicated father, Matthew has had enough of Kelis's little rebellious attitude towards him and Nadia becoming friends with the enemy. He didn't care at all about Bella's Abduction and was glad the woman was gone. "She only married for the money," he kept saying when others asked for his opinion about it. He even made a protest to get rid of the Caliente family because they kept stirring up even more trouble.

This is how Nina became fed up with the big ham and decided she and Dina should just move then since there was nothing left for them to do. Seeing the neighborhood back in its place again, Matthew thinks all will be fine again, but for how long? 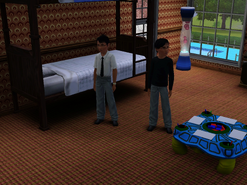 Matt (on the left) and John (on the right) as kids. 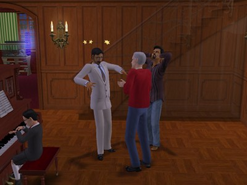 Mortimer: @#$%@$! And let that be a warning for coming in my home unannounced! 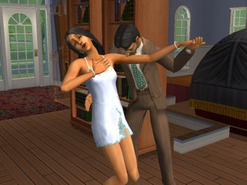 Even Matthew can be sweet.
Add an image to this gallery

Hello Matthew! Your wife and I get along swimmingly, but you and I do not. May I ask what the problem is? And why must you act so tacky towards others, especially my In-laws? I'm not fond of them either, but I do tolerate them.

Salutations Mrs. Goth, to answer your question my wife seems to enjoy your company. I, however, do not tolerate anyone who is not up to MY expectations. You however have married a Goth, I can't be associated with a Goth. Your In-Laws have a history with my family and our generations. I have to keep secrets from others because of Simoleon's issues. Goths nor Saints speak too much of their past, we don't want anyone to put their two cents in our business.

You are quite rude Mr. Saint. Perhaps if you weren't so disdainful you would see that all Goths are not bad people. Oh, and tell Kathy I booked us a nice reservation at Old Town Quarter at 5 tomorrow.

You have to show some attitude to be powerful, that is the saying in my family. The Goth family has always been full of traitors and thieves. I will also tell Katherine of your news, I'm sure she will be pleased and show up with a gift as she does with her friends.

Oh, that would be the most lovely! On a side note, Alexander sat me down and addressed my behavior towards you. However, I don't care about what he has to say. The Goth family is NOT full of traitors and thieves! We are respectable individuals. And, look at your uncle Paul. Is he not a traitor and a thief?

Mrs.Goth! Please do not bring children into this conversation! We both know our children have nothing to do with this! And besides my daughters are not wild or crazy as you assume they are! They respect you and your family even though I do not approve! You know nothing of my family and I respect it of you would never ever bring this conversation up again THANK YOU and GOOD DAY!

Dear Mr. Saint, it is Henrietta's husband, Alexander here. I would like to express with great sincerity that I am sorry for my wife's actions. She should have not said the things about your children that she did. I, unlike most of my family, hold a great amount of respect for you and your family. I guarantee my wife will not insult you again. She holds no hatred for your wife, and wishest continue their coffee date. Sincerely, Alexander W. Goth.

Dear Matthew, I was wondering how the relationship with you're family is. And how did the Saint/Goth feud begin? (And do you have a little crush on somebody else?) Or do you want to grow old with your wonderful wife? ~Mystery Guest

Mystery Guest, I hope you don't mean having a crush on the enemy because I can't stand those people to a second and anyone else. I don't know to be honest, the feud may have begun centuries ago, Goths and Saints have an old tale that has been passed down from centuries of betrayal long ago....but enough about that *cough*. And yes, I'll grow old with my wife, we Saints really don't have divorces.

you are too mean why can't you end this thing with the Goth your daughter is in love with Mr. Alexander Goth end things with the Goth sir

Mean? I'm never too mean! Learn your place! I'll never end anything with those disgusting Goths! If my daughter loves that goth boy then I have no daughter!!!

You, Sir, are a very crude person how did you even end up with a wife and let me tell you that it's very wrong to even be enemies with your own daughter im a friend with the Goth and they are very disgusted with the Saint!!!!

It's a family secret actually, I'm not one to gossip.

How could you hate the Goth family? Gunther and Cornelia are so nice (although a bit grumpy) and they founded Sunset Valley. I don't understand. Mortimer was also very good and changed the world with his scientific discoveries! I just don't get it. Isn't it better to have friends rather than enemies? Your daughters are upset and stressed with the rivalry and you aren't getting any younger, so maybe you should forgive Mortimer for whatever happened.

The Goths are no different from us Saints. Mortimer thinks he's high and mighty...the man and his terrible inventions can't even save him from death! I WILL NEVER FORGIVE HIM!!!!

Dear Matthew Saint, you say "The Goths are no different than us Saints" What does that even mean? How can you say that his inventions so 'terrible' when he invited the Elixir of Life? Something you and your wife clearly used.

Hello Mr. Matthew Saint, this is the Grim Reaper and I am making this letter to you because I feel like you are NOT being nice to my in-laws. I am married to the half-sister of Mortimer and her name is Gladice, you may not know her because you knew nothing about the Goth family when you were a kid. if yo say another thing about my in-laws I will take your soul as I did with your dead family members. and now you should be scared that I'm the brother-in-lw of your rival. ---Grim Reaper

Retrieved from "https://sims.fandom.com/wiki/Fanon:Matthew_Saint?oldid=908204"
Community content is available under CC-BY-SA unless otherwise noted.