Mason Wordsmith (né Moneygrubb) AKA "M.B. Wordsmith", is an original sim (creation of LexxBlix/AedanStarfang) residing in Willow Creek in the Sims 4. He is a famous author of crime and mystery fiction and is a member of the prestigious Moneygrubb Family, though he and his kin prefer to use the pseudonym "Wordsmith" as their household name. He is best friends forever with his cousin Draven Bloodshy, and good friends with his Father, siblings and immediate family. He has a slightly negative relationship with Queenie Ètrange, his former abductor.

Life Leading up to the Sims 4[edit | edit source]

Before the start of the game, Mason is a teenager living with his siblings at Moneygrubb Manor in Newcrest. He attends Buckingham High School as a senior, and has several classes with Oblivia Poe, and the two eventually found themselves enjoying one another's company. Not long after his graduation, Oblivia became pregnant with their first child Carver. Oblivia and Mason decided to keep their relationship and pregnancy as secret from his hot-headed father, Ansel, who would most certainly disown Mason for such a scandalous affair.

Eventually Mason was forced to move back in with his father, at the new Moneygrubb Manor, now at Rippling Flats. During this time Mason had been submitting and self-publishing his own written works, and had built up enough acclaim to become a celebrity and earned a lucrative book deal. Mason and Oblivia came clean to Ansel, who while surprised was otherwise happy and enthused with the revelation, and gave them his blessing. Mason proposed to Oblivia, and the two were hastily wed and planned to move to a much larger lot to accommodate a budding family. Ansel offered to give them "Avarice Acres", a lot located across the street from his own home, under the condition that he pay for construction of their new house as a late wedding gift.

At this time Mason had altered his household name to "Wordsmith", his pseudonym. Carver was born not long after most of his younger aunts and uncles, as such he became good friends with Corvus and the twins Edgar and Allen Moneygrubb. Mason had been hyping up his latest mystery novel; "Why Sims Thrill", and was on a book tour when he was abducted by aliens and impregnated, and returned to Oblivia days later with an obvious "baby bump" much to the latter's amusement. Eventually Elyon was born, an alien boy whose human form resembled his father, while his alien form resembled his mother. Mason adored his newborn son, but was tense and unnerved around the baby's mother for obvious reasons.

Years and many successful novel sales later, Mason has become a "tour de force" in the literary community and is now a proper 4-star celebrity. He brings home a nice salary to keep his family supported and his beautiful home maintained.

By the start of the Sims 4 Proper, both of Mason's sons are students at Buckingham High School, and his wife has become a "stay-at-home mom". Mason is at this point an accomplished and much sought after writer, and is the envy of every writer's block accursed sim in Newcrest. After years of internalized deliberation, Mason decided to finally write a saga detailing his own experiences with alien abduction and subsequent "probing", and the life style changes that come with.

Prototype Mason and Coquetta chatting outside

Mason as a teen 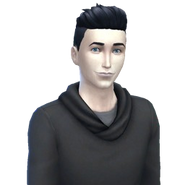 Mason's outfits as a teen

Proposing to Oblivia Poe
Add an image to this gallery
Retrieved from "https://sims.fandom.com/wiki/Fanon:Mason_Wordsmith?oldid=931566"
Community content is available under CC-BY-SA unless otherwise noted.