Mary Saint was created by Starmoonie. Mary is the mother of Abraham and a couple more kids but she is mainly a "Trophy Wife" or Gold Digger.

A considered brat in her time, Mary consists of living the life as a filthy rich somebody than a nobody. She married Luke out of luck after her parents fortune ran out. Luke does not know of Mary's true intentions and never found out.

Mary was the daughter of a very wealthy businessman whose company went bankrupt after 12 years. She was looking for a rich man to marry and found poor Luke Saint one night at a town party one evening. Chatting and dating him up was easy then came marriage and kids, which she really didn't agree to but if it kept her from being poor than she'd do anything.

She didn't dare to spend time with her kids and didn't teach them any toddler skills, instead she let their butler do most of the work while she was off shopping. Days became dim for her when she found out she had very few days to live because of her age. She didn't want to leave the rich life behind and being the evil mother she was, she tried to store money away in a secret bank account so if she ever ate ambrosia she would come back for her simoleons.

Mary's urn is located inside the Saint home, placed on a mantle. 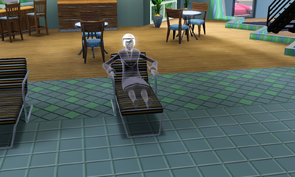 Chilling at the Gym.
Add an image to this gallery

Retrieved from "https://sims.fandom.com/wiki/Fanon:Mary_Saint?oldid=492497"
Community content is available under CC-BY-SA unless otherwise noted.