Marsha Curious (née Loner) is the daughter of Ajay Loner and his robot wife Tammy Loner. She is important in the Curious family as the wife of Klatu Curious and the mother of their child Drew.

Marsha is the daughter of Ajay Loner and his self-made wife Tammy. Tammy is a servo and for some reason she developed a system to create children with normal Sim DNA similar to a female Sim. Together with Ajay she created Marsha and Glenn.

When Marsha is a teenager she meets Nikto Curious and is fascinated by his green skincolour. They date a few times and they even share their first kiss, but things don't work out between them. She meets his half-brother Klatu Curious and she falls in love. She gives him his first kiss and they go steady.

As she is older than Klatu she has to wait a few days before Klatu turns in an adult, but when he does she immediately moves in the Curious household. They WooHoo for the first time and get an unwanted pregnancy, not wanting the child to be a bastard they get engaged and marry when Marsha is about to give birth. During that period Marsha befriended her brother-in-laws partner River and her cousin-in-laws partner Tessa Singles Later Marsha's and Klatu's son is born: Drew Curious! A normal looking Sim, what satisfies Klatu as he hates the aliengenes..

Marsha gets annoyed by the fact that Klatu is always focussing on his work instead of his son, what made her teach him his toddler skills all by herself. She think it's because of the stress and people in the household and demands that they move out. Klatu, knowing that this is not the problem at all, agrees and they leave the Curious household.

When Drew grows older Marsha hints towards Klatu that she wants another child, Klatu however refuses leaving Marsha crushed. She starts a career in the education, so she still will be surrounded by children.

She is worried about her little brother Glenn when he starts dating her niece Sarah and disapproves of their relationship, but they seem to be serious about it so she can't do anything but accept it.

In her career she got stuck as a high school principal, she doesn't really like the job because the oldest annoy her and the youngest will disappoint her later anyway, but still she hopes she can make a difference to some of these children.

Marsha notices that when Sarah grows up as an adult she started dating other guys and was mad at her for cheating on her younger brother Glenn, although they didn't talk to each other in ages. She got tired of being involved in everything and just tried to leave them both alone.

Klatu gets more annoyed by his son Drew, as he is in Klatu's eyes a failer in life what makes him move back to the Curious household as soon as he turns into an adult. With the house being empty without her child, Marsha invites Nikto and River to move in with them and when the twins go to college Lucifer and Tessa join them.

When she hears her son Drew finally found love (although it's just the maid Genesis) she is extremely excited, and even more when they announce their first pregnancy. Optimistically she tells everyone she finally becomes a grandmother! However this changes when she hears that Genesis went in labour way to early and that this made her lose the baby. Drew and Genesis lost their first baby girl named True. This much worry didn't do any good for Marsha's heart and weakened her health. When Genesis cancelled the wedding Marsha's heart broke and cried herself into her early death. If only she knew that Drew would give her two new granddaughters not much later after her death.. 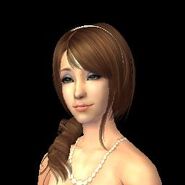 Marsha as an adult. 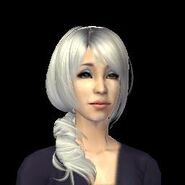 Marsha as an elder.

Marsha's family tree.
Add an image to this gallery
Retrieved from "https://sims.fandom.com/wiki/Fanon:Marsha_Curious?oldid=743007"
Community content is available under CC-BY-SA unless otherwise noted.