Featured Fanon
This fanon was a Featured Fanon in April 2012. Its layout and content is an example of excellence in the Fanon Namespace.

Marissa Perez is a female Sim who lived in Riverview. She was to become the personal stylist and image consultant for the Garvouis family, but a forbidden love affair would lead her to quit her job prematurely. Tragically and unwarranted, Marissa became very poor as a young adult and would stay that way the rest of her life. She kept the identity of her eldest son Archibald's father, a secret from him. Archibald would only learn of it post mortem, after her death, making him forever resentful of her. She is also the mother of Caio and Mariana. All of her children were fathered by different men, whom she would never marry.

Marissa Perez was first hired by the newly married Constance to be her personal stylist and image consultant to Garvouis family. It was her talent that mostly caught the attention of Constance, ending up chosen over the other candidates. Her stay at Garvouis home wouldn't last long, as she would quit her job abruptly and move out.

While she had been living with them, Constance was very focussed on writing, while her husband, Isaac, needed to relax from crafting inventions and found himself intrigued by Marissa dancing in the attic. She was very attracted to him in return and flirted back, starting their fling. Afraid of having Constance find out as it was all happening right under her nose, as well as fearing for her own reputation and future as a stylist, Marissa told her she had to leave, moved out and bought a small condo to live in.

Marissa was very fearful, because she knew the paparazzo had caught a glimpse of the two lovers leaving the hot tub, and the chance of him having taken photos that compromised her and Isaac was very high. Isaac ensured he had paid them very well in order to keep their silence, however.

Constance was on her way to her second pregnancy when Marissa left, but Isaac paid her numerous visits during this period, impregnating Marissa in one of the many visits.

While Isaac's children were growing up in a happy family and prosperous house, Marissa was raising their son on her own. She received daily a small amount of money as child support, that Isaac was saving and hiding from his wife. He kept Marissa attached by giving numerous gifts throughtout her life, and even on false pretenses of legitimizing their son. Marissa was hopeful he would leave Constance for her one day, but that would never happen.

Additionally, she was so absorved in her own turmoil, she almost neglected her first born, not even caring to buy a crib - he would either sleep on the sofa or on the floor. His toddler skills were not learned and he grew up badly into a child. She noticed he a quite peculiar child, wanting to collect bugs and insects and then killing, and his malefic laugh really put her off. He was also always pulling pranks on her, which further drove them apart, even though she never grounded him and was even scared of him.

Out of despair for waiting around for Isaac, Marissa, previously blinded by passion, found she still attracted men like bees to honey, and soon began dating a trauma surgeon, the much older Dr. Wilson, with whom she went steady. She felt something was missing, it did not feel anything like like being with Isaac. However, determined to take herself out of the gutter, she continued the relationship and was hoping Jebidiah would want her to move in and ask her to marry him.

However, Dr. Wilson felt very creeped out by her son's behavior around the couple when he visited, and found his pranks to be especially devious. He was also not happy with how Marissa dealt with her son, believing he needed to be dealt with an iron first instead of ignored or molly coddled. Predicting that the relationship would also not become serious, Marissa would start lashing out at Jebidiah, and her mood swings became even more unpredictable. She was also being seduced by another man, João Maria Quelime, with whom she would have a fling.

Rumours of cheating started spreading like wildfire, and soon reached her partners' ears. Added up to the fact that she was already a single Mom when they met, Wilson could not help but grow very suspicious of her motivations to be with him, and terminated their relationship.

In public disgrace once again, she was over the top upon learning that she was pregnant, even if she was not sure who the father was. She claimed the child was Wilson's and she vainly attemped to tell him so. However, Dr. Wilson tragically died of Old Age before the child was born, who turned out to be his. Neither did Marissa or Caio, their son, inherit a single penny.

Moreover, Archibald had just grown up into a Mooch teen, and couldn't be bothered about helping with the finances at all, acting resentful when he had to take care of little Caio for her. She had to face his ridicule and scorn once more. The only job he worked was at the Masoleum as a creepy burial specialist, but even that job he rapidly quit.

Marissa began dating her previous fling, the self-registered gardener João Maria, who moved in with them, after the couple went steady. She expected this move to help their finances, but it did not. Financial problems would be further worsened by a third pregnancy, a girl who would be named Mariana.

On one of the rare visits Isaac paid her, she was surprised by Isaac being aged into an elder, but she still found she was madly in love with him. However, Isaac came to tell her that what they had was over, he loved Constance and his family. A shocked Marissa would be heartbroken and grieve for days the future she had dreamt of. To top it off, João Maria also died by Old Age. Then, Marissa became an elder herself.

Marissa tried to indulge herself once more, this time falling for the much younger Ryan Cole, also brother to Isaac's son's wife. Her son Archibald grew up ino a young adult and let his girlfriend, Becky Bayer, stay at the place all the time. Marissa was distraught that none of her children cared enough to help her. Even Mariana, who had grown up to be beautiful like Marissa had been, embarassed her mother with her personal style. How could she have no sense of fashion at all? However, her daughter blamed the poor choice of clothing on the family's financial problems caused by Marissa's instability. Mariana got a part-time at the BookStore, though.

Torn between spitting out the truth to Archibald, so her kids would stop blaming her for everything, or keeping the secret to herself, she realized none of the options would make up for her failure. She thought it could get no worse than it was...

Unfortunate Marissa would die at home of causes rooted out as natural.

Later, a woman would recall a conversation she had with someone who had known her her somewhat well. She wrote how she recalled in a note:

Tip
She was so pretty, from a young age, she realized she turned heads wherever she went, and she always wanted to make the most of it. But don't be fooled, behind her pretty face, there's also talent, or at least there used to. She always thought fashion would give her a promising future, I agreed... just maybe not in Riverview... And, no working for couples, please... She speaks well, has movie star looks, she really leaves everyone scratching their head - just how could she have turned out so unfortunate? They say she can't keep a man around... and that child of hers? Don't even get me started! -Old Unidentified Lady 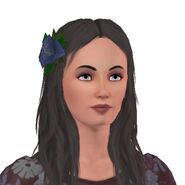 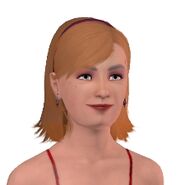 Even as an elder, Marissa still wanted to look fashionable.
Add an image to this gallery
Retrieved from "https://sims.fandom.com/wiki/Fanon:Marissa_Perez?oldid=883552"
Community content is available under CC-BY-SA unless otherwise noted.