Fanon article ownership
This fanon page was created and is owned by CockamamieBusiness (talk). Unless the edit is constructive and/or minor (such as fixing a template), please do not edit this page unless given permission from the author.

Madeline Cole is a character in the ongoing story by the user Cockamamie_Business: 'A Laboured Legacy [Soon to be created]

Born into a small, suburban family in the destitute East End of SimCity, Madeline had no bothers or sisters sisters to break her out of her shell, instead only having her career-oriented parents, an elderly cat: Hattie, and a hyperactive retired greyhound, Ant. She has always been a good student, getting straight A's no problem, however, socially, she isn't as successful when it comes to making friends. Early into her teen years, Madeline was abducted by aliens. She has no recollection of the event, or anything that occurred in her life before the abduction, suggesting they erased her memory. Due to this incident, her parents decided it was time to move. They settled on the peaceful neighbourhood of Briney Fjord, some fifty miles north of SimCity.

Since starting high school in Briney Fjord, Madeline has made a few friends. One of which is Demi Moran, who supports her through her newly diagnosed anxiety. However, Madeline has another problem. She has "accidentally" fallen in love with her other friend, Ione Collins. Madeline and Ione met online and both bought tickets to see their favorite singer, Halloween Jack one night. Out of the blue, almost involuntarily, Madeline kissed her. Hard. On the mouth. Knowing Ione's god-fearing, homosexual-hating mother, Madeline quickly apologised, however, she didn't quite get the reaction she expected. Ione, surprisingly, shared her affection. Upon asking her to Go Steady, Ione initially refused, saying: "What if my mother should discover our little love-affair?". Despite the unease regarding her mother, she soon agreed, but on the condition that they should keep the relationship hush-hush.

Madeline,as mentioned in the 'Early life' section, has always had straight A's. Her lifelong goal is to become a Media Magnate, "Like Rupert Murdoch, only less evil, man." as she claims. She reached the top of the Teen/Elder career ladder just five days after applying for a job in the journalism field. 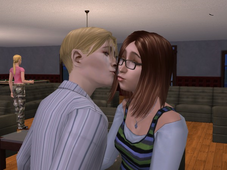 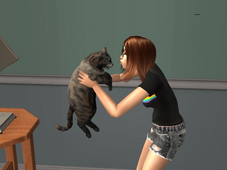 Madeline loves cats; before she met Ione, her life ambition was to be a crazy cat lady. 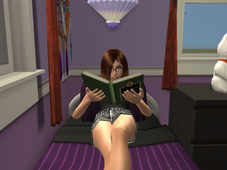 Very dedicated to her studies, she spends most of her time studying in hope of a higher education. 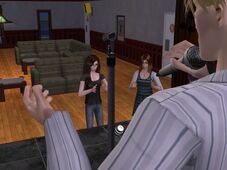 With Ione (left) at Halloween Jack's gig.
Add an image to this gallery
Retrieved from "https://sims.fandom.com/wiki/Fanon:Madeline_Cole?oldid=834840"
Community content is available under CC-BY-SA unless otherwise noted.