Fanon article ownership
This fanon page was created and is owned by IFanon (talk). Unless the edit is constructive and/or minor (such as fixing a template), please do not edit this page unless given permission from the author.

Lyla Johnson is the Sim that gets into literally all of the Sims games. She is a time traveller, as explained in her Sims 4 personal bio. Most reiterations of her involve her travelling with her dog Styx, and all of them usually involve her neighbors Monty Python and Armani Nixon.

Lyla is medium skinned with brown eyes and long black hair. Most of the time, she is seen wearing her signature blue hat (Medieval and Life Stories are the exceptions; in Castaway she wears a worn down version of it). She is most likely to be wearing a shade of blue across her outfits if it's available. She is also quite thin, except in Medieval where she is very fit.

In TS1, Lyla is new to the neighborhood and is very awkward at making friends. Her time is mostly spent in her house with Styx (who she got a few days after she came), with Armani and Monty (her newly turned friends) or at Old Town on the coasters.

By now, Lyla has discovered her first time jump and has taken her friends with her. This life, however, has established different things for all three of them. In TS2, Lyla is a seasoned traveler, having nearly all the mementos in each place. If you ask her about them, she's sure to know something.

In TSLS, she cut her hair very short. Devastated by the "no pets" law, she finds a roommate instead: Sydney Greene. She uses her for most memory experiments she does.

In TSPS, she has dropped her blue makeup, in favor of a more more "normal" color, due to her neighbor and enemy Kohl Martin having outlawed "eccentric" make up colors. Her dog, Styx, often chases him off the lot if he happens to appear.

In TSCS, she has tamed a wild hyena as a pet and is stuck living with Candy Valance. She is a hunter while her roommate is a Gatherer.

The Sims 3 and Medieval Life Edit

It's been hinted at in her bio that Armani and Lyla were possible sisters and that her mind was altered so she can't remember it. In TS3, she is just learning about altering people's memories and seeing if hers were affected. She lives in Westerberg with her fellow neighbors along with some other faces.

In TSM, she's jumped far back to see if any of her ancestors lived in the kingdom. Everyone is suspicious of her because of the way she speaks. 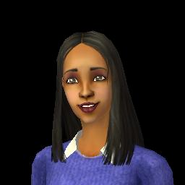 Lyla in The Sims Pet Stories 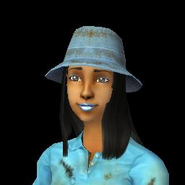 Lyla in The Sims Castaway Stories 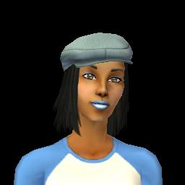 Lyla with Armani
Add an image to this gallery
Retrieved from "https://sims.fandom.com/wiki/Fanon:Lyla_Johnson_(iFanon)?oldid=906528"
Community content is available under CC-BY-SA unless otherwise noted.