Lupin Space (previously Miller) is the daughter of Amin and Atta and the sister of Kylie, Flynn, Roger, Nancy and Allen. She was one of a small group of deceased sims that was inexplicably along with her neice Ariel although it is still unknown what caused this. She was married to the Grandson of the Grim Reaper, Ember Miller before she cheated on him and they divorced. She graduated from Académie Le Tour, a high achieving university. She was known to be quite hard to get on with but once you know her she was very kind.

Before Lupin was born, Amin and Atta lived a poor life as they came from a foreign land. Although Atta's mother was a normal sim, she didn't show any normal genes. One day, someone became interested in Amin and Atta's gren skin and offered them a modeling job for a new green range of clothes. Suddenly everything changed for them. They were rich and in demand all the time. After a few years, they took early retirement and settled down.

Even as a baby, Lupin was the hardest out of all of them to cope with. She would never sleep at night, wouldn't eat her food or just lie in her cot contentedly like Kylie had. Amin and Atta were confused by this as they had heard the second child would be easier as they were used to it by now. Although she was hard work, they managed and were a little relieved when she grew up, not knowing the problems they'd have to face...

As a toddler, Lupin was even more troublesome especially when Flynn was born. Luckily help was at hand, Kylie took Lupin under her wing and taught Lupin all her toddler skills before Amin and Atta had a chance to. This made Lupin a little less troublesome as she was now more independent and could play by herself or with Kylie whenever she wanted. After this, Lupin was almost...pleasant.

As a child, Lupin was a moody girl. She was mean to most people but was extra nice to Kylie and Flynn as they were her sisters. She was often told off at school for being mean to the other children and her parents, especially her dad were unhappy. Despite this, her grades were good, never lower than an A so she was the pride of her mother.

As a teen, Lupin was very annoyed that she couldn't go to college as she wanted to be with her sister Kylie, who was a sophomore. Her parents explained that she was 'too young' so Lupin sulked off. She remained this way until one day, her parents told her she could start applying and getting a scholarship. She got accepted into Academie Le Tour and couldn't wait to move into her new dorm with her three new roommates...

As a young adult, Lupinn went to Academie Le Tour as she had the right grades and got a good scholarship, not that she needed it as her parents could've paid but she wanted to do something all by herself, a new independent start to her life. She moved into a dorm with three other people Billy Nivian, Ginger Newson and Ember Miller. Although she acted like she didn't care, she secretly wanted to be liked by them. When they moved in, Lupin immediately fell for Ember but she was upset as he was initially attracted to Ginger more as she was prettier. This made her sad because Billy also liked Ginger. This made her act cold to them all but they just began to dislike her even more. She then decided to take a new approach and tried to show her nicer side which was VERY hard for her. This began working and she was soon friends with them all. One day she finally had the courage to ask Ember out. He agreed as he could see Ginger liked Billy more. However, on the date, Ember began to fall for her. Things moved very fast between them as they had already had their first kiss and first woohoo. Lupin was very hapy with this as she'd never had a boyfriend or friends ever before and she realised what she'd been missing out. In Junior year, just after Billy and Ginger became 'official', Ember proposed and she happily agreed as she was truly in love with him. She spent the rest of college having a great time with all her friends.

As an adult, Lupin and Ember had a small low key wedding with just family and close friends. Ember and Lupin didn't want to settle down immediately, they wanted to travel the world, have adventures so when they finally settled down, they would have a lot to tell their kids about. But, on their honeymoon, Lupin got pregnant with a baby girl. All their plans were put on hold as they had to start planning for the new arrival. Life was a bit hectic especially after Jeannie was born. Life was a bit crazy after that with all the relatives and friends visiting and Jeannie crying ALL NIGHT… This meant Lupin and Ember had no time alone and their relationship declined rapidly. Lupin began seeing somebody on the side, Joe Carr not because she wanted to hurt Ember as part of her still loved him but because she was lonely. One day, Ember was fired from his job and came home early only to find Lupin and Joe together. He immediately sent her out the house and filed for a divorce. He also tried get and won full custody of Jeanie and he won which made Lupin furious as she loved her daughter. She stayed with Joe but didn't really feel anything for him. Lupin felt alone even though it was all her fault. At Joe's house, Lupin was very busy as everything always seemed to be broken. One day, Lupin was repairing the TV for Joe when she heard a noise at the window. Nobody quite knew what happened after that but when Joe came back, Lupin was dead... The Jury claimed her death was a 'Tragic accident' but anybody who knew Lupin, knew she was good at mechanics and would never be so careless and let herself be mildly injured let alone killed by it. This made everyone very suspicious and many believed Lupin had been murdered...

Lupin slowly became aware that she awake and standing alone, in a graveyard. The ground in front of the grave appeared to be undisturbed, showing no signs that Lupin's former body had come out of it. The last thing she remembered was Joe doing something to the electricity wiring, then a bright flash along with surging pain and finally, nothing. She knew the place she was standing in, it was the Space Family Graveyard. She didn't know why she was standing there because as far as she knew, she had never died.

Her eyes scanned over the headstones and she was shocked to see that her parents were there. They were alive, weren't they? Flynn was there, Kylie too. Lupin was confused and shocked, her sisters were alive! They had to be, she had seen Flynn only a few days before. She was in college and talking about a new man in her life and she seemed really excited. They couldn't be dead. She read the tombstone and it said that both of her sisters had died of old age. But they were both adults.

Lupin began to panic, why were all these people dead? She read over the other gravestones and had to choke back a sob when she saw one for her daughter Jeanie. According to the headstone Jeanie had drowned a few years back, leaving behind a son. How could Lupin have missed all of this? Jeanie was a little girl. As she stepped back in horror, she bumped into the headstone that she had been standing in front of. She didn't even have to turn around. She knew who it belonged to.

It belonged to her.

She read over her own tombstone. She had died almost twenty years ago of electrocution. That's when it hit Lupin, her last memory was her death, Joe had murdered her and she had been gone for the last twenty years. Jeanie had been and gone without her leaving behind a family of her own; her sisters had grown old and left her behind, stuck in an age that she didn't belong in.

Lupin didn't know how or why but for some reason, she had been resurected. Suddenly, she heard a noise from behind. She whipped around and was confused to see a tall, willowy teenage girl with long dark hair and green skin just like hers. "Who are you?" Lupin asked her. "I'm Ariel. Ariel Space." She said. Ariel seemed to recognise her, she held out her hand to Lupin, "It's okay, Lupin, I was dead too." 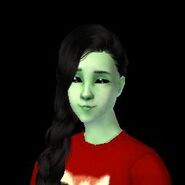 Lupin Space as a Young Adult 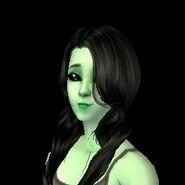 Lupin Space as an Adult.
Add an image to this gallery
Retrieved from "https://sims.fandom.com/wiki/Fanon:Lupin_Miller?oldid=724729"
Community content is available under CC-BY-SA unless otherwise noted.