Fanon article ownership
This fanon page was created and is owned by JM9193 (talk). Unless the edit is constructive and/or minor (such as fixing a template), please do not edit this page unless given permission from the author.

Lucas Dortheimer is a member of 12th generation of the wealthy Dortheimer Family, being one of the few kind people in this cunning and nasty family.

Lucas was born in Riverview to Gisèle Dortheimer and her husband Yanis. His mother just went through some dire events (namely four deaths, and amidst those two murders, and these caused her to become evil), and his father was always cheating on Gisèle. He died relatively early in Lucas's life (at the end of his childhood), being drowned by his own wife for cheating on her. Lucas didn't know about it.

Moreover, his mother strongly disliked him. She did not take care of him, and was obnubilated by her vengeance on her husband's lovers. He therefore spent much of his childhood reading booksand playing alone. He had not particularly good marks at school.

He got a father-in-law, a doctor called Jebidiah Wilson. He really liked him, and contrary to Gisèle, Jebidiah helped him with his homework and played with him. He grew into a teen when Gisèle gave birth to his sister Pélagie.

However, what he didn't know, is that Jebidiah once had an affair with Yanis, and Gisèle only married him in order to kill him to avenge herself. And one night, She starved him to death. During this time, Lucas was cooking some waffles for the family without noticing anything, and the waffles caught in fire! He ran outside with his sister, but Gisèle was trapped in the burning house, and died in the gruesome flames, and the secrets about her two husbands' deaths died with her. She and Jebidiah had enough money to allow Lucas to buy a very large house for him and his sister.

Lucas, who still was a teen, had however some hard times: he had to go to school and mostly to raise his sister who was still a toddler. He had to call a babysitter, Justin Ortez, in order to take care of her while he was at school. He fortunately had not to work since he was rich enough to afford Justin's help.

As time passed, Lucas progressively fell in love with Justin and the two went steady together. Still, the relationship was short-lived since Justin finally died electrocuted as he read in the newspaper. A sad new that almost destroyed Lucas, who hired a new babysitter, François Berg, who comforted him.

When the two became young Adults, they realized they loved each other and got married soon after. They both got a job in the Law Enforcement, and continued to raise Pélagie, who grew into a shy yet beautiful teen. The two succeeded in Pélagie's education, since she did not grew evil like her mother was. They met a retired policeman called Donald Horsepurple, who lived with his wife Laura and his teenage son Roger, who was a nice and clever guy. Lucas and François decided to introduce Roger to Pélagie since they though the two would be a perfect match. This was a success, and Pélagie and Roger went steady together.

She then grew up and began to organize her wedding with Roger. Lucas and François couldn't be happier, but the two met a gruesome end when they were crushed by a meteor while they were out for a stroll. Their deaths cast a gloom over Pélagie who began to act strangely, building a large, underground maze beneath her house, for unknown purposes... 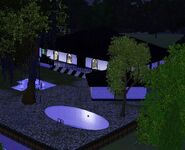 The house Lucas bought when Jebidiah's burned to ashes
Add an image to this gallery
Retrieved from "https://sims.fandom.com/wiki/Fanon:Lucas_Dortheimer?oldid=703739"
Community content is available under CC-BY-SA unless otherwise noted.