When it comes to names, Loverboy DaSim certainly lived up to his. A true Pleasure Sim, Loverboy's motto was "Let it flow, it floats back to you," which he may or may not have picked up from watching copious amounts of TV in his formative years. Loverboy's life is a story of rags to riches - though his riches really came about by luck and coincidence.

As a young man, Loverboy was employed in the Slacker career. Hanging out Downtown, he made a lot of friends and had a lot of dates, including Melissa Fancey. A gorgeous Romance Sim as well as the President of a company, the two hit it off quickly. Unfortunately, the fun, careless times they shared came to an end. They were rushed into a shotgun wedding when it was discovered that Melissa was pregnant. She gave birth to Loverboy's first son, handsome Jubilee, his "pride and joy." For the naive couple, taking care of Jubilee was difficult, especially when Melissa became pregnant again. She gave birth to Ketchup. Soon after moving into a Downtown apartment, Loverboy tragically discovered his wife in the arms of his neighbor, the tan, blond, and hunky Matthew Tomyoy. (Perhaps this is why Ketchup bears so little resemblance to his father!) Without hearing any of her excuses, he broke up with her and kicked her out of the house.

In the darkest period of his life, he was fired from his job while having to take care of two children in his small apartment. Loverboy was never one to give up; he took up a career in Law. Desiring a mother figure for his children, he was engaged to Jill Smith, another Romance Sim and a member of the Garden Club. He soon regretted this hasty union when he bumped into his old flame, Jan Tellerman, at the grocery store one evening. Seeing her in the produce aisle, he immediately took her in his arms and kissed her madly. Loverboy broke up with Jill and married Jan instead. As a Hall of Famer she brought a big financial boost to the household. She gave birth to twins, a boy, Beau Hunk, and a girl, Chiffarobe.

When Jubilee and Ketchup returned from La Fiesta Tech, the DaSims decided to move out of their cramped, one-bathroom apartment and into the gorgeous mansion at 210 Wright Way. Here, Loverboy and Jan were happy to spend the last days of their lives. Loverboy lived to see Jubilee become a Scientist, Ketchup become an Entertainer, and Beau Hunk and Chiffarobe do so well in school that they gained scholarships. Soon after the twins left for La Fiesta Tech, Loverboy passed away of old age. 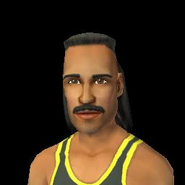 Loverboy as an adult

Loverboy at the Lucky Shack

Loverboy and Jan on their wedding day

Retrieved from "https://sims.fandom.com/wiki/Fanon:Loverboy_DaSim?oldid=776249"
Community content is available under CC-BY-SA unless otherwise noted.