Loki Saint was created by Starmoonie. Loki is actually the definition of "Trouble." He always finds something to destroy and play with, its basically in his nature.

As a kitten, Loki was in and out of homes and never seem to stay in one place. It was then Yolanda came across the poor kitten in a shelter and thought he was perfect for her daughter. At first it was going great but then he just turned plain rotten as an adult. Shredding newspapers, chasing the mailmen, and hissing at guests made Sims actually fear than love him. The only ones who really who could control the cat was the Hearts.

After being adopted by the Hearts, Loki is quite skeptical about his new family. He kept his distance from Katherine, mainly she was a child and was an animal lover. But eventually he warmed up to her and became his friend, mostly because she was the only one who actually took care of him!

He then reached adulthood and started to really act out as a child would. He scared the family to death for quite sometime but it was always Katherine who had to but the beast in its place. Loki mostly enjoyed going on fishing trips with Yuri so he can get the experience of the outdoors. The cat was actually treated as a house cat because he was so destructive.

Life in the Sims 2Edit

Now at his elder stage, Loki isn't as much destructive and aggressive as he was when he was an adult. He shows very LITTLE of it, but not a lot. He now likes to watch Nadia play the piano, or go to the park and chase the butterflies once in a while. He does not like the fact that he has to live with Matthew (who in general hates animals.)

Loki pays more attention to Nadia, since she is reminds him more of Katherine when she was a kid. Hes friends with the Goths, but not with Cassandra (he doesn't like like being around Don.) 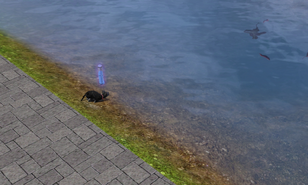 You're not gonna get that fish... 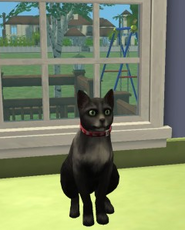 You sit and DO NOTHING!
Add an image to this gallery

Retrieved from "https://sims.fandom.com/wiki/Fanon:Loki_Saint?oldid=693858"
Community content is available under CC-BY-SA unless otherwise noted.