Lily De Mort is the daughter of Antonio De Mort and Imogen Space. Both her parents are well known and Lily's birth was quite well known too. Lily has taken features from her parents.

Before she was born, Lily's mum had a lot of relationships whereas her dad was much older and was a widowed around the time Imogen was a teen which definitely meant they had a huge age gap. After a lot of relationships on Imogen's side which included cow worshipping jock, an arrogant ex-fiancée, evil ex-girlfriend who had Charlie and a Local womaniser, Imogen moved in with Antonio as his housekeeper. They went out and he got her pregnant on their first date. Lily was born in Antonio's gigantic mansion.

As a baby, Lily had a happy life with her parents but this was short lived. Her dad was old and passed away before Lily could even talk or walk. Imogen was devastated and when Charlie came because of abuse from Imogen's ex-girlfriend Vanessa, Imogen had trouble coping. However, Imogen managed to cope and began building a house for herself after she sold Antonio's home. She briefly married a builder called Stuart but the only person she really wanted was a woman called Ola who she got in the end. Imogen divorced Stuart and Ola moved in. Sadly so did Imogen's brother Alistair.

Lily's life as a toddler was quite uneventful except for Ola disliking Alistair and Alistair hating her back. She was taught all her toddler skills by Imogen and Ola and got on well with her brother Charlie who thought she was very sweet.

As a child, Lily stopped being the baby of the family when her mum and her step-mum adopted a toddler called Magdelena. Lily knew they were adopting but she never expected somebody as cute as Magdelena. Lily was jealous and Charlie thought Magdelena was too cute as well so she and her brother sided against their new sister. Her brother like sailing so he used to take her out on the boat but after he met Alice he took HER instead so Lily went on 'strike' and refused to talk to him, although her pouting face just made him laugh.

As a teen, Lily wanted to go sailing like her brother so she got her mothers to buy her a sailing boat but soon discovered that she didn't like sailing alone, Charlie's stories of the Kraken had finally got to her and she was freaked out too much to properly enjoy herself. So she sold her boat and instead decided to throw herself into her friends. She had a great time at school and thanks to her good looks, was soon asked out by the captain of the football team, making most other girls jealous.

Lily was happy with her life as it was although she always felt superior. In her eyes, she was prettier, taller and smarter than just about everybody she knew. She just knew that she was destined for great things which is why what happened next made so much sense to her... She was in the local park one day when a tall, stylish woman came up to her and asked if she had ever considered modelling as a career and in that moment she knew, she was destined to be a supermodel... 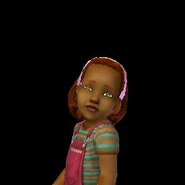 Lily De Mort as a Toddler 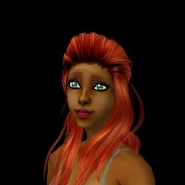 Lily De Mort as a Teen

Lily De Mort as a Teen in Sims 4
Add an image to this gallery
Retrieved from "https://sims.fandom.com/wiki/Fanon:Lily_De_Mort?oldid=745896"
Community content is available under CC-BY-SA unless otherwise noted.