Lilith Pleasant is the youngest daughter of Daniel Pleasant and his ex-wife Mary-Sue Oldie (formerly Pleasant). She is the twin sister of Angela Pleasant, the step-daughter of Kaylynn Pleasant, and the older half-sister of Carter, Faith, and Sebastian Pleasant. Lilith is the niece of John and Jennifer Burb, and is the cousin of their daughter Lucy. She is also dating Dirk Dreamer.

Lilith and her twin sister Angela have never got along, mainly due to their contrasting personalities, and the fact that their parents seemed to favour their older daughter. The twins' memories show that Angela was potty-trained, and taught to walk and talk, while Lilith was not, and Angela owns a computer while Lilith doesn't. Their relationship is so bad that they will regularly shout at and hit each other whenever they're together.

One day, Mary-Sue got fired from her job and came home to find Daniel WooHooing with the maid, Kaylynn Langerak. Mary-Sue, enraged, immediately broke up with her husband and moved out, leaving her two daughters with her ex-husband. Daniel and Kaylynn got married quickly, hoping to save at least a little of their reputation. Lilith dislikes her new stepmother, but not as much as her twin sister does.

Currently, Lilith is at college, living in a house with her sister Angela, Angela's boyfriend Alexander, and her own boyfriend Dirk. She and Angela still haven't gotten over their childish feud, to the annoyance of their boyfriends. Lilith and Dirk had their first WooHoo on their first day of college. 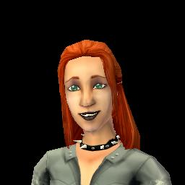 Lilith Pleasant as a teen.
Add an image to this gallery
Retrieved from "https://sims.fandom.com/wiki/Fanon:Lilith_Pleasant_(imageneralwheee)?oldid=778661"
Community content is available under CC-BY-SA unless otherwise noted.