Lilith Pleasant is a well known resident in my player stories in The Sims 2 in Pleasantview. She is the daughter of the divorced Daniel and Mary-Sue Pleasant, the more rebellious younger twin sister of Angela Pleasant, the cousin of Lucy Burb, the adopted daughter of Kaylynn Pleasant, the niece of Jennifer Burb and the elder half-sister of Clovis, Sarah and Arian Pleasant. When first played, Lilith and Angela are 10 days from becoming Adults. When they grow into adults, they will both be voiced by Gerri Lawlor.

After the relationship between Lilith's parents grew more tense, and their divorce following the exposure of Daniel's affair with his soon to be wife Kaylynn - Lilith and Angela realised that the bitter relationship between the two of them needed to change. But it wasn't exactly easy - as they had or at least appeared to have nothing in common. Angela apologised to Lilith for whatever benefits she got that Lilith didn't, and in return Lilith apologised for her lack of kindness and respect. They began having conversations on a regular basis to try and improve their Relationship which initially didn't work out. I eventually found that the problem with their relationship was that they almost had opposite interests.

Lilith was mainly interested in Food, Paranormal, Sci-Fi, Health, Crime and Toys while Angela was mainly interested in Environment,Fashion, Entertainment and Animals. I found that if I got one of them to talk about the things that interested the other, then it would improve their relationship. I wasn't always able to choose what they talked about but after a rocky climb, they became friends. I also found that I could make them have more lengthy and constructive conversations by making them talk about Culture - something they were both interested in. Other interactions such as jokes were also a slight benefit.

The twins got a real chance to show how much their relationship had changed when they helped track down the wanted burglar Gordon King (he was trying to rob their house). Many months later when both their daily and lifetime relationship bars had been maxed out, I deliberately made Angela have an encounter with Death, only to be saved by Lilith.

Lilith has made several new friends in my player stories including Dustin Broke, Alexander Goth, Kaylynn Pleasant and Nina Caliente. She tried to be kind to Angela's new friend, my CAS Sim Suzy Parker but the latter wouldn't give Lilith a chance. Suzy was arrogant and rather rude. While their relationship remains negative, their second meeting fared better than their first one. I didn't think much of Lilith's relationship with her boyfriend Dirk - which had little more than flirting, hugging and kissing to keep it going. Angela's relationship with Dustin didn't seem to perfect either. So I decided to have them trade boyfriends.

Lilith and Angela are now A+ students enrolled in Private School. They are now employed in the Criminal and Law Enforcement Careers respectively. Their opposing career tracks may threaten to tear apart the relationship Lilith and Angela have mended, but luckily there is no evidence to prove that it will come to that. 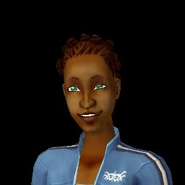 Lilith's acquaintance Sophie.
Add an image to this gallery

Retrieved from "https://sims.fandom.com/wiki/Fanon:Lilith_Pleasant_(C.Syde)?oldid=818277"
Community content is available under CC-BY-SA unless otherwise noted.