Leona also featured as a main character in the crossover If Astrid Met Leona which set shortly after the end of Book 2. She also made a short appearance in spin-off The Equestrian.

Leona was born in Twinbrook February 14th 2004. She was the elder from the twin, making her the first eldest child in her family. During their time in the town, Leona and Jean were friends with their neighbors, Annie and Enrico Delgado.

Despite always saw Enrico as a weirdo, it seemed that Leona was secretly admire and had crush on him. However, the Delgado family moved to the other town after a year living in Twinbrook, Leona gave Enrico a handkerchief as a keepsake.

At some point in 2013, after her father, John, had a conflict with her grandfather, Thomas, Leona and her family left Twinbrook and moved to Sunset Valley.

Leona was 9 years old when they moved.

Leona was very enthusiastic about her new home. In the first school day, Leona and Jean quickly made friends with some local chilfren such Bella Bachelor, Darlene Bunch, and Kaylynn Langerak. Unfortunately, Leona was once had a conflict with Mortimer Goth and even had a fight with him during the Goth's feast party. However in a later day, after Mortimer begged for forgiveness thanks to Bella's advice, Leona also forgave him and the two became friends.

During Bella's slumber party, Leona had a conversation with Michael Bachelor, who told her that he would participated in Sims University's entrance test. Leona unwittingly motivated Michael to not be afraid by telling him her great-grandfather's story.

Following the arrest of Nancy Landgraab, Leona and her friends decided to checked Malcolm in his home to gave him support.

Several months after moved to the town, Leona and her family would returned to made a visit to her grandparents house in Twinbrook, when she witnessed her father getting reconciled with her grandfather.

Several years later, Leona would passed the elementary and middle schools, becoming a high school student. Leona's interest in sport led her to join the school's women basketball team. She achieved MVP title twice and eventually became captain of the team. Leona also became one of the most popular girls in her school.

However, it made Dina felt jealous on her. Their relationship became strained after Dina found her boyfriend asked Leona for a date, even though Leona rejected the proposal. The two fight, triggering a feud between them.

When her uncle, Peter had an accident, she and her family promptly came to Appalosa Plain to checked on her uncle's condition.

Leona, now 16 years old, lived just like other ordinary teenagers. She still hanging out with Bella, Darlene, and Kaylynn. One of Leona's main problem that she still couldn't find a right guy for her despite many guys had proposed her. Leona claimed that those guys weren't her types.

In one day, Leona reunited with Enrico and Annie who just moved to the town. Leona's close relationship with Enrico made her teased by Darlene since everyone in school were never seen Leona had a close relationship with guys (having rejected some guys who asking her for a date). Leona and her friends then threw a homecoming party for Jean, who just returned from France.

In another day, Leona and Dina fight for once again after Leona stopped Dina from bullying a girl. The fight stopped by their teacher/coach who suspended them from the team and won't be signed for the next competition. As the result, Dina blamed Leona and held a grudge on her. Leona was once abused by some bullies, but saved by Enrico. At the end, Leona gave Enrico a kiss as a gratitude and begun to had crush on him.

When Chris presumed missing, Leona and Jean went to find him. The two learned that Chris, accompanied by Alex and Tamera, actually went to the Sunset Valley's old mine to find a Rainbow Gem, where they met Big Steve Underwood.

During the prom, Enrico confessed her and Leona accepted. The two kissed and becoming a couple. Unfortunately, a fire started. Leona found that Dina was trapped inside the building and went to rescue her. The two survived thanks to firefighters. At the end, Leona and Dina ended their feud and reconciled, becoming friends for once again.

Three months later, Leona and her family would finally met Chris' imaginary friend, Charlie, who turned to be real after Chris gave him the potion made by Jean.

In a next day, Leona would met a girl who had talent in basketball, Astrid Toadstool. Impressed with her skills, Leona challenged Astrid for one-on-one match and surprisingly defeated by the newcomer.

The two later became friends due to their similarities, despite they still had conflicting traits. (Leona was neat while Astrid was slob) When Leona went to Astrid in order to play soccer, Makayla tricked them with a beehive, causing them to be scared. But then Makayla said it was just a prank. Astrid and Leona told Mrs. Burgundy about it.

The next day Leona encourages Astrid to go on a date with Arlo Bunch.

During her semester break, Leona and Jean returned home for several weeks and would attended a reunion with her high school friends. Sometimes later, Leona learned Chris' problem with Tamera and gently consoled and cheered him up.

After their semester break ended, Leona and Jean returned to the University. Before departed, Leona wished good luck to her brothers in the upcoming band competition.

Shortly after graduated from the University at age 21, Leona had become an athlete, having win any competitions she attended. At age 26, Leona would marry Enrico. From their marriage, Leona got a healthy son named Nathaniel who born shortly after their first wedding anniversary

At age 33, Leona would eventually retire from her career. Shortly afterward, Leona found herself pregnant with her second child, whom she later named Joana. Years later, Leona decided to back to work, but as a Sport Agent.

Leona was 44 years old during this time.

Eight years after John Redfield's death, Leona now 52 years old. She still worked as a Sport Agent, but claimed that she already bored with her job and was planning to retire.

During these years, Leona had strained relationship with her daughter, Joana. Leona disliked Joana's attitude and punk-looking appearance and the two often argued at each other. 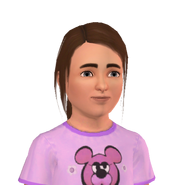 Leona as a child 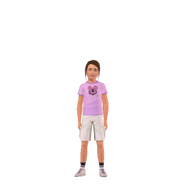 Leona's appearance during A Sim's Tale

Leona and Jean in a cafe 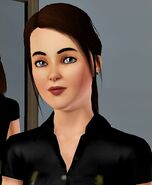 An earlier design of teen Leona (note: her eyebrows were slightly thicker) 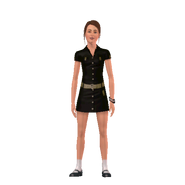 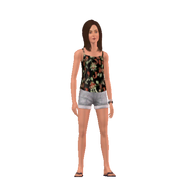 Leona with her hair down (outfit 2) 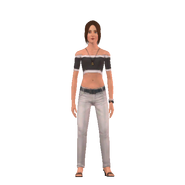 A render of Leona in Beach

Leona relaxing at the beach 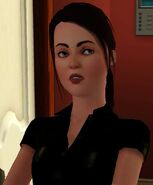 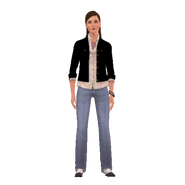 Hanging out with Astrid (thanks to DarkSuicune2000)

Leona and her fan

Leona in front of her dormitory

Leona in a party
Add an image to this gallery

My illustration of teen Leona 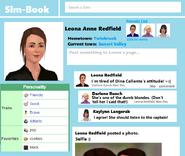 Arguing with her daughter

Still arguing
Add an image to this gallery
Retrieved from "https://sims.fandom.com/wiki/Fanon:Leona_Redfield?oldid=853238"
Community content is available under CC-BY-SA unless otherwise noted.