Fanon of Preexisting Sim
This page is about a preexisting Sim in a fanon setting. This article should not be treated as an canon article. For information about the canon Sim, visit here: Caryl Zarubin (Sim State University)

Leah Rose Shaw (née Miguel) is a sim residing in Belladonna Cove with her husband Mitch and his daughter Audrey, and their son Liam. She is the daughter of Annette and Jerry Miguel.

She has a puppy named Jake.

Leah never had any serious relationships in her teen years. Art was one of her passions. Despite the field not being very lucrative, she decided to go to art school.

Leah enrolled at Sim State University as an art major. Not happy with her life at Sim State University, she transferred to La Fiesta Tech her sophomore year. It was there she met and befriended Mitch Shaw. She was immediately smitten with him, although he was engaged at the time. Despite her crush, the two decided to remain friends. However, Leah butted heads with Mitch’s fiancee, Jeanette. For his sake, the two attempted to tolerate each other.

Despite her tumultuous relationship with Jeanette, Leah was happy when she found out Jeanette and Mitch were expecting. She later started dating Blair Seavey. However, Mitch and Jeanette made the decision to separate a few months after the birth of his daughter. But Leah still had feelings for him.

Leah and Blair broke up shortly after the one-year mark, although Mitch was now dating college student Eileen Tinsley. Upon graduation she rented an apartment in Belladonna Cove and took a job as a comic book penciler. By graduation, Mitch and Eileen ended their very short-lived relationship. She invited Mitch over to show off her new apartment. With both of them now single, he decided to make his feelings for her known. The two wound up spending the night together and began dating. 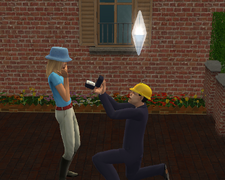 After a year of dating, the two moved in together. Things were going great as Leah progressed in her art career. As Audrey was on the cusp of childhood, Mitch spontaneously proposed, and Leah accepted. Audrey had reached her childhood by the time their wedding came. The two were married at Central Park, and then embarked on their honeymoon in Takemizu Village.

Upon return Leah discovered she was pregnant. During her maternity leave she became closer friends with Eileen, her husband's ex-girlfriend. After 9 months, Leah and Mitch's son, Liam, was born. 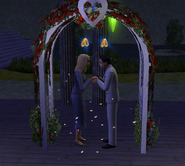 Mitch and Leah's wedding
Add an image to this gallery
Retrieved from "https://sims.fandom.com/wiki/Fanon:Leah_Shaw?oldid=901247"
Community content is available under CC-BY-SA unless otherwise noted.