Layton "Layt" White is the brother of Kay White, as well as the husband of Talia White and (officially) the father of Jack White. He is also the uncle/step-father of Rose and Snow.

Layt and Kay meet Hansel Holzfaller and Talia at Varg's Tavern, where Layt and Kay frequently hang out. Hansel is instructed by Carabosse to introduce Talia to Kay, which he does. Eventually, Kay and Talia's mutual attraction becomes a steady relationship, which blossoms into marriage. However, Talia gradually becomes tired of her marriage to Kay and she starts having an affair with Layt, who is initially reluctant to have an affair with his sister-in-law but is talked into it by Talia. Eventually, Talia divorces Kay and gets married to Layt, moving into his household. Layton encourages Talia to have an affair with Heimdall Horner and become pregnant with his baby. Talia obliges and eventually gives birth to Jack, whom they pretend is Layton's son. After Jack's birth, Heimdall is found dead in his home. 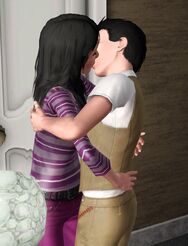 Layton kissing his brother's wife.
Add an image to this gallery

Retrieved from "https://sims.fandom.com/wiki/Fanon:Layton_White?oldid=784083"
Community content is available under CC-BY-SA unless otherwise noted.