Layla Zorgeloos is the tenth and youngest child of Bob Zorgeloos. She is the daughter of Jamie Zorgeloos.

She was properly raised by her mother Jamie. Her father Bob didn't pay a lot of attention to her. She remembered playing with her older sister Emma a lot. She loved playing the xylophone and the Peg Box. She maxed both skills as a toddler.

As a child, she started developing an interest to the galaxy. She spent a huge amount of time searching the galaxy through the telescope. She was able to discover some new stars and even planets. She showed off a huge talent for logic.

When Layla went to high school, she signed up for Music Class. There she revived her musical passion when she first touched the snairs of the guitars and the keys of the piano. She developed a high skill in all four instruments (guitar, piano, bass and drums).

After a while, it became clear she would prefer to become a famous movie composer, in stead of becoming a scientist or a doctor, eventhough she would have got the capacities to do so.

Layla fully developed the guitar and piano skill. She played a lot for tips at the park or just at home. She joined the Music career and she advanced quickly as she already got the right skills.

She became friends with her half-sister Melodie, who also works in the Music career, and they decided to start up a band called 'Meteorites', referring to Layla's interest to the galaxy.

Layla moved in her career and joined the Symphonic branch. She met the love of her life pretty late in her life right before she became an adult: the athletic and handsome vampire Gladsten Farmwell while she was joining Cemre at the gym. They went on three dates together: one at the cinema, one at the restaurant and one at home. With Layla's perfect music skills, she was able to seduce Gladsten with a wonderful serenade. They became boyfriend and girlfriend and they were very happy together. As Layla is a genius, she knew Gladsten was a vampire, while he thinks she still doesn't know. Layla is not afraid though to have a relationship with a vampire.

Layla was deeply in love with Gladsten and she didn't want to wait any longer, as Gladsten never tried to get their relationship to 'the next step'. She proposed him and they had a private wedding, just the two of them in their bedroom. As Layla asked Gladsten to marry her, he took her last name 'Zorgeloos'.

Three days after the marriage, their vampire baby son Nathan was born. It soon became clear that Nathan was a very talented and special child.

Gladsten's commitment issues were a great obstacle in their relationship. One day, Gladsten couldn't stand it any longer, thinking about spending his old days with his wife and baby. He decided to break up with Layla without any explanation, and he left the house.

After she had split up with Gladsten, she searched for another guy in the local club 'The Toadstool' together with her sister Emma, who had also lost her husband recently. Emma met a handsome man called Raphael Nugent, but Layla didn't find the right one.

A few moments later, she met werewolf Dwayne Wolff at the gym. Dwayne was honored to be the boyfriend of a 4-star celebrity. Unfortunately, this relationship didn't last that long as she caught Dwayne cheating.

With her Lifetime Hapiness points she bought an Age Freeze Potion. She drank it when she was 4 days away of becoming an elder. Nathan also brew her an Imiginary Friend Metamorphium Potion so that she could bring her imaginary best friend Pat to life.

Layla making out with Gladsten 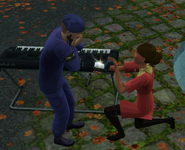 Layla proposed Gladsten
Add an image to this gallery
Retrieved from "https://sims.fandom.com/wiki/Fanon:Layla_Zorgeloos?oldid=646783"
Community content is available under CC-BY-SA unless otherwise noted.