Laura Andresen (née Sanderson) is a sim created by DarkSuicune2000. Laura, along with her Ernest Andresen founded the Andresen Legacy when they moved to Sunset Valley.

Laura was adopted in May of 1940 a month after she was born. Her adoptive mother was Mary-Anne Sanderson and had no adopted father. When she was 5 years old her mother bought her a crayons and papers. Soon she loved coloring and drawing. When she was in elementary school she became friends with a girl named Bessie and a boy named Ernest. The were like a trio of best friends and never left each other's side.

When Laura was 16 she had her first kiss with Ernest over in a fifties diner. Laura and Ernest were the geeky couple in the school. Laura had good etiquette and never said a bad word unless she had too. She was not a straight A+ student, her grades fluctuated from being a B's or C's. Her best friend Bessie was a dating a guy named Buster, and they went on double dates all the time. After she graduated she went to college studying the art major. Ernest and Laura went to separate colleges and went into a long-distance relationship. They got to see each other during holidays like Love Day and Snowflake Day. When they graduated college they moved away to Sunset Valley together in a house that had three bedrooms. When she was 29 she gave birth to Lanaya Andresen in 1969. They hadn't gotten married yet because Ernest was in the coast guard but in 1971 they finally got married. In 1976 she gave birth to Gary Andresen, whom she was more strict to than she ever was with Lanaya because Gary was a rotten kid. When Lanaya graduated she was left with Gary. Gary was eleven, and was already going around being a bully to other kids around town Laura had enough and finally yelled and screamed at him when he was 14. Gary knew that he should back off. Her stressed levels went down a lot after that. Later he dropped out of his freshman year of college and moved to a house three blocks away.

In the year 2000 she turned sixty. Ernest retired from the coast guard and finally started to live a normal life. In 2000 her granddaughter Lexi was born. From time to time she took fare of Lexi when Lanaya couldn't. The same year Gary had his own daughter named Gertrude. In 2004 Cole was born to Lanaya, the last of her grandchildren.

She has long blonde hair with bangs. She has blue eyes and grey circular glasses. She wears a blue winter coat, tan gloves, argyle knee-high socks, and black heels.

Lexi as an Adult visiting the ghost of Laura.

Mary-Anne and Laura in a cafe. 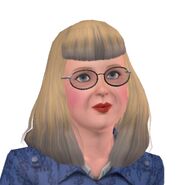 Laura's clone which I created to get a higher-quality headshot. 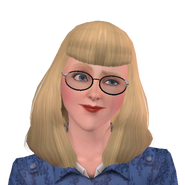 Young Adult Laura
Add an image to this gallery
Retrieved from "https://sims.fandom.com/wiki/Fanon:Laura_Andresen?oldid=789206"
Community content is available under CC-BY-SA unless otherwise noted.