Lars Beaker is the son of Jenson and Sarah Beaker. Sarah is a member of the Curious household, what makes Lars one as well, even though they share a different last name.

It's interesting that even though both of his parents don't show any alien genes (like skin or eyes) it does show on Lars. He most likely inherited this from his grandfather Nikto.

He married Mandy Beaker, and they got a son together named Lotus.

Sarah didn't get her marriage for free, she had to give a lot of hints before Jenson even had a clue they were serious. When they discovered they would soon get a little baby together Jenson didn't think much of it; this is what married people do, they get kids. Sarah however was extremely happy and made sure she took enough rest to get a healthy baby.

When born they discover Lars has green skin, just like his grandfather. Sarah and Jenson are both not surprised as they are used to strange things considering they come from strange families. Lars is a Scandinavian name referring to his father's and grandfather's Scandinavian roots.

Lars got taught how to walk and sing a nursery rhyme by Sarah and learned how to talk and got potty trained by his father Jenson. He and his father become really close and Jenson loves to dress up in silly costumes to entertain his son.

Jenson, the good father he is, is involved with Lars' education, he sends him to private school. There he meets his first friend Mandy Grunt, the daughter of Ripp and Margaret Grunt. He studies well and with a little help from his father every now and then he gets result to be proud of.

When turning a teenager Lars chooses the knowledge aspiration. His friendship with Mandy grows in something more and they share their first kiss. They fall in love and went steady.

Lars gets a job in the entertainment career just like his mother. When his parents move out he and Mandy decide to move in together. Not much later they get engaged. When Mandy discovers her pregnancy the two get married and their first son is born: Lotus Beaker.

In Lotus' toddlerhood Lars teaches him how to use the potty, while Mandy teaches him how to walk and talk. They move out of the Curious house as Lars no longer feels part of the Curious family. Not long after they moved both his parents, Jenson and Sarah die of old age. Lars is saddened but seems to recover fast, he puts his son in private school and gets at the top of his career himself.

When Lotus grows up as a teenager he chooses the popularity aspiration. Lars enjoys to watch his son growing up, and it couldn't have gone any faster. Although Lotus doesn't seem to find love to be an interesting thing, his social life is rather normal. He just rather has friends than girlfriend(s). There's one friendship Lars is a little worried about though; for some reason the nanny Nicole Thompson is still sticking around. Even weirder is that she seems to get younger and younger (Benjamin Button much?). Many assures Lars that she is just being friendly, and using super good facecreme (which she later asked about of course).

His worries weren't completely for nothing, when Lotus turned into an adult they started dating, both admitting that things might have been going on for a while already. Having used the most innovative SimScience, Nicole was made back into an adult, giving her the ability to start a family with Lotus.

So they did, Lotus and Nicole got married and soon they were expecting. Lars feeling himself getting older by day hoped he would live long enough to see his grandchild. Luckily he did, he met little Belle, his beautiful granddaughter. However shortly after he died of old age, leaving his wife, son and granddaughter behind.

Note:There will be no pages for Mandy and Lotus, as from this generation the family isn't related to the Curious family anymore. 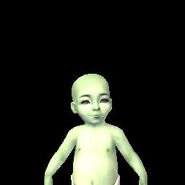 Lars as a baby. 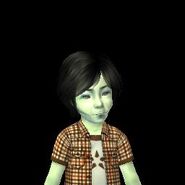 Lars as a toddler. 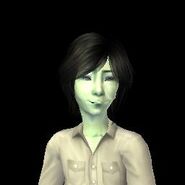 Lars as a child. 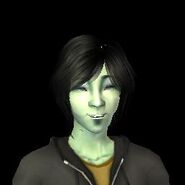 Lars as a teen. 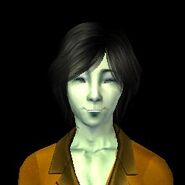 Lars as an adult. 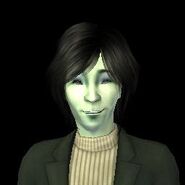 Lars as an elder.
Add an image to this gallery

Unborn baby Lars with his parents Sarah and Jenson.

For some weird reason Jenson likes to dress up like a pirate to potty train Lars.

Lars and Mandy with their unborn son Lotus.

Lar's son Lotus as a teenager. 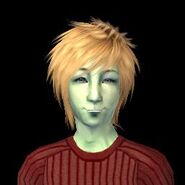 Lotus as an adult.
Add an image to this gallery
Retrieved from "https://sims.fandom.com/wiki/Fanon:Lars_Beaker?oldid=743040"
Community content is available under CC-BY-SA unless otherwise noted.