Lana Space is the daughter of Quinn and Jacob. Jr. She is the first child of the Fifth Generation. She has been lead astray...

Before she was born, Quinn and Jacob. Jr started dating when Jacob. Jr's mother died and Quinn comforted him which soon lead to them dating. Although, Quinn's brother and Jacob. Jr's best friend, Barney's love life was never very strong, Quinn and Jacob. Jr never wavered. They managed to stay together despite everybody saying teen love doesn't last. They went to college together, happy that they had proved love does last.

As a baby, Lana was unexpected although they were happy about her they thought life would be a little hectic. When Lana was born, her parents were so happy. They moved into they're own residence to be their own little family together. Although life was a little crazy with having to balance College and Families, the little family pulled through.

As a toddler, Lana was treated well but noticed that her parents got a little stressed sometimes. She loved her parents but noticed her Mum was getting harder to hug, Lana couldn't reach round her belly... She grew up around the time Suki was born.

As a child, Lana played games with her sister. She was annoyed that everyone loved Suki more than her as Lana was a little moody and was not as sweet even as a toddler. She tried to not be jealous but it was hard. She was annoyed when her mother became pregnant again, another sweet baby in the family... After Kylie died, Lana was sad but she had never really got on with her that well. However, around the time of her birthday, Quinn announced the news. They were moving away to a deserted place called Snowdon Peaks. Lana was angry as they left before her birthday... She hated it in Snowdon peaks. She made no new friends as they had all known each other since birth, also she came across as moody due to the fact she was missing her friends back in Kierra District. To make it worse, Suki aged up to a child well, and made loads of friends. Lana was miserable... Lana aged up with just her close family although she wished she had been alone.

As a teen, Lana became a rebel. She began dating Arlechino Mane, a local criminal and became enthralled by his career. Criminology. She got a job but lied and said she was working as a store clerk and they believed her thinking she had turned over a new leaf. Lana found that she loved the thrill even when she heard that others in a higher level than her were dead... Lana was very good at her job and found out that they needed somebody to pull of a major burglary for them and everybody was mysteriously away around that time except for Lana. The job would mean a huge thing and Lana could leave home forever... Lana lied to her parents, told them she was staying with friends but really she was going Downtown to pull of one of the biggest heists off all time... As she was leaving in the car at midnight, someone jumped in front. Suki. Lana told her to go away but she refused. In a flash, Lana moved the car and Suki fell to the floor... Lana nearly ran out of the car to call for help and see what had happened but she didn't. Instead she put her foot on the accelerator and drove away. She was surprised that she didn't feel sad at all, just annoyed that Suki had got in the way. On the way to Downtown she rung Arlechino and told him they were breaking up. He asked why but she refused to say and hung up. She smiled to herself, she was now ready to start her new life. Lana aged up to an adult that night and moved into a flat.

Lana joined forces with a successful criminal who went under the name Scorpio. She hated him but couldn't change anything. Lana felt slightly taken advantage of as she was mostly a distraction. To distract herself she began dating a man called Thomas Nicks. She chose him as he was the nicest man she knew and she needed somebody ncie in her life. 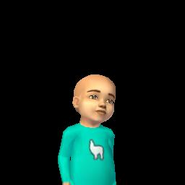 Lana Space as a Baby. 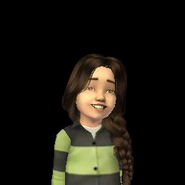 Lana Space as a Toddler. 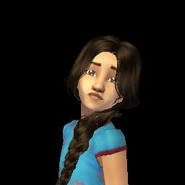 Lana Space as a Child. 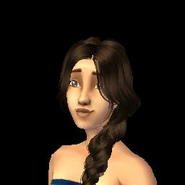 Lana Space as a Teen.
Add an image to this gallery
Retrieved from "https://sims.fandom.com/wiki/Fanon:Lana_Space?oldid=673810"
Community content is available under CC-BY-SA unless otherwise noted.