Léonard "Léon" Darga is the ex-husband of Emma Curious, a born Curious. He is the adoptive father of his nephew Kevin.

Not much is known about Léon's earlier (or previous) life. He died when he was a young adult and got brought back to life, but this went horribly wrong and now he has to deal with the consequences. He dropped out of college and went back to Strangetown.

Back in Strangetown he meets Emma Curious and she suggest that he can move in with her as he is not able to take care of himself right now. He finds this odd, as they are strangers to each other, but he still accepts. He gets a job in the music career and builds up a close friendship with Emma. The two fall in love and later marry.

Léon really wants to have children and brings this up to Emma. First she doesn't seem to care much about it, but later she gets more excited. After trying for a long time they visit a doctor and hear that Léon is infertile.

Living together with his sister-in-law Ana is hard for him as Emma is often mad at her, especially after the birth of his nephew Kevin. He suggest that they should move out, but Emma refuses as she thinks that her sister will win that way. Léon still needs a lot of help as his body is not always working the way he wants and he is depending on Emma. He knows that she is flirting a lot with Blair and wouldn't be surprised if Emma had affairs with other Sims as well, but he is afraid that Emma will leave him if he says something about it.

He is shocked when he comes back from work one and discovers that Ana and Blair both have died in a fire. Their son Kevin is fine and he hears Emma telling the police that she found him outside. Léon is not sure if the story Emma tells is really true, but again he is too afraid to ask the truth. They decide to adopt Kevin, making him a part of the Darga family.

Even though Léon is happy to have a son now, he gets more frightened of Emma. Emma gets moodier every day and Léon just can't forget about the mysterious death of Kevin's parents. In town many people walk up to him to share their condolences, two of those women were Jessica Curious and Tammy Loner (widow of Ajay Loner and mother of Marsha Curious). Léon tries to keep the conversation short, as they make him nervous, especially Jessica. Tammy gives her phone number to him and tells him that he can always call if he wants to.

Strangely enough he decides to do that and he calls Tammy. They become friends and Léon feels he finally found the one who understands him. He tells Emma that he has to work overtime a lot and uses that actual time to go see Tammy. Léon talks with Tammy about Emma and she encourages him to do something about this situation, if not for himself, he has to do it for Kevin. Léon knows Tammy is right but he is absolutely sure that Emma will kill him if he would ever say such things to her. When Léon starts to get feelings for Tammy, and even better she returns those feelings, he knows it's time to tell Emma it's over.

Together with Tammy he faces Emma and tells her their marriage is over. He feared the worst but Emma reacts suspiciously calm. She agrees and hopes that he and Tammy have a great future together. When they break the news to Kevin he starts crying and runs away to his room.

The next day Léon and Tammy are found in 'the deed' by the police. It seems that Tammy electrocuted both of them. 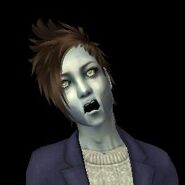 Léon as an adult.
Add an image to this gallery
Retrieved from "https://sims.fandom.com/wiki/Fanon:L%C3%A9on_Darga?oldid=743046"
Community content is available under CC-BY-SA unless otherwise noted.