Kylie Space is the daughter of the wealthy aliens, Amin and Atta. She is also the wife of Fricorith Tricou and mother of Quinn and Barney. She is best friends with Cara and once had an affair with Frances.

Before Kylie was born, Amin and Atta lived a poor life as they came from a foreign land. Although Atta's mother was a normal sim, she didn't show any normal genes. One day, someone became interested in Amin and Atta's gren skin and offered them a modeling job for a new green range of clothes. Suddenly everything changed for them. They were rich and in demand all the time. After a few years, they took early retirement and settled down.

As a baby, Kylie enjoyed life as she was the apple of her parents eye. She had a happy fulfilling life, adored by her parents.

When she was a toddler, Kylie was taught all her toddler skills. Also around this time, her sister Lupin was born. Kylie loved having a little sister and looked forward to all the things they'd get up to.

As a child, Kylie was a great student. Despite her alien appearance, she had quite a few friends. Her best friend was a girl called Cara Gothier. Around this time here sister Flynn was born. She had lots of fun dressing her sister up as princesses.

As a teenager, Kylie didn't enjoy being a teenager much. She couldn't wait to go to college with Cara. She and Cara had great plans, after college they would travel the world and be famous and finally, if at all, settle down.

At college, Kylie and Cara moved into a dorm with two boys called Francis and Fricorith. Both boys were instantly attracted to Kylie, but Kylie liked Fricorith more than Francis. Cara, however fell hard for Francis. After lots of persuading he finally agreed to go out with and for a while everything was perfect. But after they'd all graduated, Fricorith and Cara left early to avoid the drunken party afterwards. When she was drunk, Kylie woohoohed with Francis which gave him the wrong message. She instantly regretted it and left while Francis was sleeping.

As an adult, Kylie married Fricorith and they had they're wedding almost immediately. She was a little sad that she Cara couldn't fulfill their original plans but didn't really mind as she loved Fricorith. After they're wedding she and Fricorith decided they wanted a child. Kylie was lucky and got pregnant almost immediately. She gave birth to twins around the time Cara and Francis had their daughter Debbie. Life was perfect for Kylie, she had a great life with her family. Also she grew close to Fricorith's cousin, Gvaudoin. Also she had her third child, Niall and life was going great. Suddenly, something bad happened, her dad died in a house fire and life stopped going so smoothly... Kylie had a lot on her plate as she was the mother of the family and had to make sure the twins weren't bunking off and Niall drank his smart milk. Kylie was tired out but one day Atta died. Kylie was distraught but then she found out that Nancy and Allen could either live with her or go to a foster home. Kylie didn't want her siblings to go into care as she knew they would never forgive her so she said they could live with her. But Nancy was moody and Allen kept having nightmares so Kylie was tired out. Luckily Nancy came back a week later and was determined to go to college and be a lawyer. Kylie was happy for her sister and agreed. She was also happy about Flynn coming to visit and loved seeing her sister and nephew so happy despite everything. One day, Kylie got a big shock. Nancy had had an accident and couldn't remember a thing. Apparently, she had been found by local tycoon Billy Noel and his wife Stella. She had apparently been with another criminal, Seth but he had escaped. Kylie immediately drove to the hospital even thought it was 3:00 am to check on Nancy's progress but there was a man already there. Bruce. He had always been kind to Nancy and Kylie was glad he was there and not Seth. Nancy was still unconscious so Kylie just sat with Nancy hoping she's wake up. Bruce left a bit before Kylie when suddenly Nancy woke up looking confused. She looked startled when she saw Kylie and Kylie explained that she had had an accident and couldn't remember anything and that after Nancy was released she would come and stay with her. Nancy looked confused but nodded slightly. As Kylie was leaving a man walked past her. She recognised him. Seth. Kylie immediately pulled him away and told that there was no way that she would let him in and ruin Nancy's life again. This was her chance for a good life and if Seth knew what was best he would go as he would have all of The Space family to answer to if he came back again. So, Seth left and Kylie drove home thinking of a fresh new start for her sister without crime. Kylie got a horrible shock one day, Fricorith was dead. Kylie realised that she had taken him for granted and just wanted him back. She grew up sad and alone.

As an elder, Kylie felt lonely and sad. Also her best friend, Cara (Debbie's mother) died and it was odd, Cara's husband Francis suggested that they get together but she rejected him, feeling confused. Even worse, Her son's wife, Debbie died and Barney was distraught. She went to visit him one day and came to find his apartment closed off and ambulances everywhere. Barney had been killed in an almost impossible way. He'd been crushed by a satellite. Kylie wasn't sure what would happen to Belle but she was happy when she found out, her granddaughter was coming to live with her... Even though she was devastated about her son and husband's death, Belle gave her new hope. She taught Belle all her toddler skills and as she received Fricorith's pension and had money left over from Fricorith, Barney and of course her parents (large) wills so she could spend all her time with Belle and still give her nice toys. She decided to give Belle Barney's room and save Quinn's for her children. The same with Niall's room. When Belle aed up to a child she paid for her to go to a private school as she thought Belle was a smart girl and Private school would do her good. However Belle one day became frightened that she had Debbie's disease so Kylie suggested they go to the doctors and find out as there was still a chance she hadn't got it but another was that Kylie was now scared too especially when Belle told her that there was more chance she had than hadn't... Kylie was afraid as she didn't want to lose Belle or she'd feel like she'd lost Barney and the only people she would want to talk about it too was Cara, Fricorith or Lupin and they had died a while ago. Instead she rung up Flynn but Flynn was in a state because she had had a fight with her son and was worried he was going to kill himself so Kylie comforted her and left to make Belle's supper, Spaghetti Bolognese which she said she could have in front of the TV as a treat and also to distract her. Kylie as relieved when Belle told her that she had done some research and found out that there was no way she could have it at all. Kylie was happy that she wouldn't loseer granddaughter the way Debbie had. One day, when Belle was at school, the doorbell rang and a man with green alien skin like hers stood there. She asked what he wanted and he asked herif she recognised him. She said no but then he said 'you may not recognise me but you will recognise my name. Ted. Ted Space.' Ted explained that he had come for one main reason. Firstly, his sister had been killed in a fight with her husband, Donald Grunt and here body had been found in Ted's basement and so now he was in trouble. He ahd heard that he had family in Lavisha and had tracked them down. Kylie was excited byths new arrival and agreed to let him stay with them and she was determined to host a family reunion. She got her wish but not how she expected. One day when Belle was at school and Ted was out, Kylie collapsed. They rushed her to hospital but she died. The famiy reunion she was planning ended up being a funeral.. 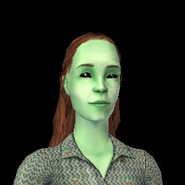 Kylie Space as a Young Adult. 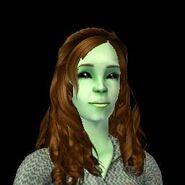 Kylie Space as an Adult. 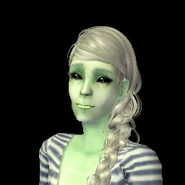 Kylie Space as an Elder.
Add an image to this gallery
Retrieved from "https://sims.fandom.com/wiki/Fanon:Kylie_Space?oldid=733446"
Community content is available under CC-BY-SA unless otherwise noted.