Klatu Curious is the son of Vidcund Curious and the second child in the Curious household. His face shows similar structure as Vidcund's, but he has his eyes and skin from his alien father Pollination Technician.

He has an alien half-brother named Nikto Curious (son of Pascal), what makes him his cousin at the same time and has another cousin named Lucifer Curious, son of Lazlo.

Vidcund loved the stories of his brother Pascal about space and the aliens so much that he wanted to experience this himself. And so he did, after gazing into the stars for hours the aliens found him and he got abducted. When he came back he didn't remember much about the whole experience and was a little disappointed, at that point Pascal found out he wasn't just putting on some weight, he was actually pregnant! Although Pascal was excited about his pregnancy, Vidcund was fearing if there would be growing something inside him as well.

Not long after that his nephew Nikto was born. Now he was sure he was having one of these 'creatures' too. His belly was looking exactly like his brother's belly did. His other brother Lazlo got married and all these changes made Vidcund reunite with his teenage love Circe Beaker, they did WooHoo when Vidcund was about to give birth.

After the birth of Klatu, his father (Vidcund) started to work again and earned himself two promotions. Pascal then reminded him that he had a child, and that Pascal wasn't going to take care of him, because he had his hands full with Nikto. Lazlo also got a child with his wife, they named him Lucifer. This showed Vidcund that his child and Lazlo's child besides skin and eyecolour weren't so different as he thought.

When Klatu turned into a toddler, Vidcund taught him his toddler skills fast after each other. If it was because he just wanted it to be over with or he was enjoying Klatu a little bit more is unclear. After that he fell back in his old habits and started to work a lot again and earned again two promotions.

Just before Klatu turned into a child, his aunt Crystal died, but he was still too young to understand.

As a child Vidcund and Klatu finally became friends and best friends. He was looking up to his smart cousin Nikto and envied his younger cousin Lucifer because of his normal looks. He has to work a little harder than Nikto but he is proud when he comes home with his first A+. Later, all three boys get accepted into private school.

Although he isn't as smart as Nikto, Klatu chooses the same knowledge aspiration as his cousin. It makes studying a little easier and keeps his good grades up. He meets Marsha Loner (daughter of Ajay Loner) via Nikto and he falls madly in love with her. After she dates his brother for a while she discovers she likes Klatu more than Nikto, they stop dating and Klatu gets his first kiss with Marsha. They decide to go steady not much later. A few days later, his father Vidcund turns into an elder.

When Klatu grew up Marsha Loner moved in on her insistence. When Nikto discovered this he also let his lover move in with them. With the house getting fuller and the three cousins being adults Pascal, Vidcund and Lazlo move out so they can start their own family in peace.

When Klatu discoveres that Marsha is pregnant they get engaged. She was about to give birth to Drew when they married. Now Marsha Loner is named Marsha Curious. His brother Nikto got engaged and he was happy for them, mostly because they couldn't produce any new alien Sims now, as they seem to be everywhere lately in Strangetown.

But he seems to be wrong and after Nikto's and River's marriage, River gave birth to his niece Sarah . Luckily like his own son a normal looking Sim. He started to work more to earn promotion and looked somewhat like his father, a workaholic. He didn't teach any toddler skills to his son.

Marsha gets annoyed by the fact that Klatu is always focussing on his work instead of his son. She thinks it's because of the stress and people in the household and demands that they move out. Klatu. knowing that this is not the problem at all, agrees and they leave the Curious household. When Drew turns into a teen Vidcund died of old age, making Klatu work harder to deal with his loss and gets on the top of the Medical career.

When Klatu turns into an elder Marsha suggests he should retire but Klatu disagrees. His father worked until his death and he will do the same. He gets more annoyed by his son Drew, as he is in Klatu's eyes a failer in life, what makes Drew move back to the Curious household as soon as he turns into an adult. With the house being empty without her child, Marsha invites Nikto and River to move in with them and when the twins go to college Lucifer and Tessa join them.

Klatu doesn't really care about his son anymore and only hears the story his wife Marsha tells him. So via her he discovers Drew's relationship with the maid Genesis. This somewhat surprises him, but he has to admit that he doesn't really care about it. He think it's cute that Marsha is so excited when they discover they're going to be grandparents, but he disapproves of the idea of the child getting born while the both of them aren't married yet. When they hear that Genesis lost the baby Marsha's health gets worse. Klatu is worried because he doesn't want to lose his wife because of some stupid baby who didn't even get born right. Marsha dies a while after the death of their granddaughter True.

Nikto, Klatu's brother tells him that after Marsha's death Drew married a girl named Aiyana and gave birth to Ana and Emma Curious. When Ana and Emma were toddlers, Klatu died of old age. He left nothing for his son Drew. 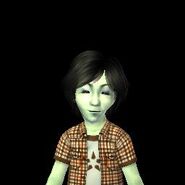 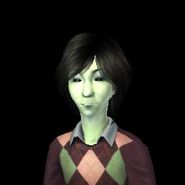 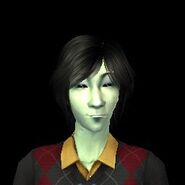 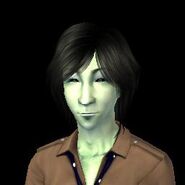 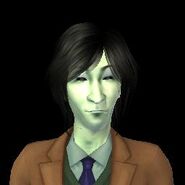 Klatu as an elder.
Add an image to this gallery
Retrieved from "https://sims.fandom.com/wiki/Fanon:Klatu_Curious?oldid=743006"
Community content is available under CC-BY-SA unless otherwise noted.