Kingston Starker is a playable resident in my player stories in The Sims 2 in Pleasantview. He is the boyfriend of Jessica Ebadi, the father of Rifle Starker, and the ex-boyfriend of goodness knows how many female Sims. Kingston is voiced by Stephen Kearin and is 29 days from being an Elder.

Kingston is undoubtedly one of the darkest Sims I've ever created. He will kill any male Sims that step on to his property and will torture any male Sims he comes into contact with. He will also flirt with any female Sim he comes into contact with, provided that he finds them attractive. If there were any female Sims that he didn't find attractive, or if they turned down his requests for romance, he would treat them much the same way he treats male Sims. Burglars do have an advantage, because unlike other Sims, they don't need to fear Kingston. Strangely, but truly, Kingston always sees burglars as his allies, probably because he is a gangster. He is good friends with Russ Bear and Gordon King.

My CAS Sim Stacen Edwards was one of the Sims who welcomed Kingston into the neighbourhood, when he moved to Pleasantview. But to a nasty shock, Stacen realised that he'd just met his worst enemy. Kingston dismissed his other visitors and trapped Stacen in his house and tortured him. Kingston quickly identified Stacen as his most vulnerable victim yet, so he preferred to keep him alive so that he could continue torturing him. After many protests, Kingston finally gave in and kicked Stacen out of his house, looking forward to the next opportunity to torture him.

Stacen decided to invite Kingston over for a fighting session - not a very smart move. Kingston asked if his potential future friend could come over as well. The Sim in question turned out to be none other than Brandi Broke. She grew anxious as she watched Stacen getting beaten up by Kingston, so Stacen told her to get lost if she didn't want to watch the violence. Shortly after Brandi Broke left, a local Townie Brandi Letourneau walked by and when she saw Stacen and Kingston fighting, she became even more anxious than Brandi Broke had been. Stacen forcefully told Brandi to leave, almost without knowing what he was saying, he thought that Brandi Letourneau was Brandi Broke again.

Stacen took his temper out on various other Sims after he'd been beaten up by Kingston, as the latter had predicted. Kingston knew that he'd manage to put Stacen through a terrible ordeal and he thought it was a great joke. But to his dismay, he'd found that Stacen had recovered half a month later. He also found that Stacen had befriended Brandi Broke and Brandi Letourneau. Kingston took this opportunity to try and upset Stacen by insulting Brandi Letourneau for having a pudgy face. Angered that Kingston had made Brandi cry, Stacen had found something worth fighting for and somehow managed to beat Kingston in a fight despite being a lot weaker. Kingston has also had a tough time keeping romantic relationships with female Sims. Before long he'd lost all of his girlfriends when they all found out about his many Affairs. Fortunately Jessica still accepted Kingston as a friend, which Kingston knew that if he mended his relationship with her, than he'd be able to persuade her to return his romantic feelings.

Kingston was Abducted by Aliens one night, and when he returned he was pregnant. Kingston was furious because he thought they'd mistakenly believed him to be female. He gave birth to an alien son that he named Rifle Starker. He thought, ah well at least he'd have a son to raise into another gangster. For a while Kingston became interested in experimentation, being the first Sim in my player stories to experiment with various Aspiration and Career rewards. His favourite was The Eclectic and Enigmatic Energiser which he was planning to use on Sims and make their hunger drop so that they'd starve to death. Unfortunately at this point, the Police arrived to arrest Kingston. He put up a fight but they managed to arrest and imprison him in the end. They gave Kingston, a death token, so he couldn't break out. To his annoyance he learned that his son Rifle had no interest in taking his place as a town gangster, and that he'd befriended Stacen's son Stacey Edwards. 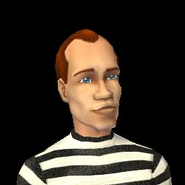 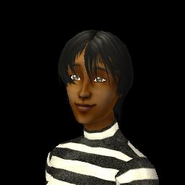 Kingston's girlfriend Jessica.
Add an image to this gallery

Retrieved from "https://sims.fandom.com/wiki/Fanon:Kingston_Starker?oldid=818472"
Community content is available under CC-BY-SA unless otherwise noted.