Kiki Alvi (née McNay-Kid) is a Sim featured in The Sims 3 Store. She is the illegitimate daughter of Travis McNay and Shaniqua Kid, sister of Rhiannon McNay-Kid, and is the divorced husband of Iqbal Alvi and mother of VJ Alvi and Miraj Alvi. She walked out on her family a very long time ago.

Kiki doesn't like to think about her past. Her bio states that her mother Shaniqua died at her and Rhiannon's birth and her father Travis was so devastated that he drowned himself. She was not good when it came to school either, but went to parties a lot in her teenage years. After high school, she had no where to live, so she moved in with an attractive friend from high school named Iqbal Alvi.

They must have gone into a romantic relationship because they ended up getting married and having two kids together, which did not go well with her because she had two traits against this, Commitment Issues and Dislikes Children. She divorced Iqbal and was kicked out of her home. With no where to go, Kiki asked her sister Rhiannon if she could move in, and she said yes. After she left, Iqbal became very stressed after not having enough money to pay the bills now that Kiki was gone. He developed wrinkles and started balding.

Kiki now lives on 27 Lost Willow Road with her twin sister Rhiannon, who is a famous celebrity. They are good friends. She starts out the game with no skills, and is unemployed. She has no relationships outside of her home. In order to reach her lifetime wish, she needs to date, then break up with 10 guys. She does not want her sister to find out about her former family, or else she will possibly get kicked out for being so heartless to the Alvi's. Kiki spends most of her days ow partying, which really only gives her joy.

Kiki has long dark brown hair, with tan highlights. She has dark brown eyes, a beauty mark, wears heavy make-up, and is fat. She wears a purple jacket with a white shirt underneath, grey pants, socks and pink heels. 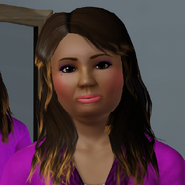 Kiki in Create a Sim 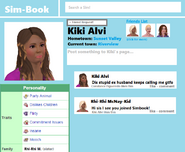 Kiki's "Sim-book" page showed during Stuck In Sims 3.
Add an image to this gallery
Retrieved from "https://sims.fandom.com/wiki/Fanon:Kiki_Alvi?oldid=834559"
Community content is available under CC-BY-SA unless otherwise noted.