Fanon article ownership
This fanon page was created and is owned by Marisa23 (talk). Unless the edit is constructive and/or minor (such as fixing a template), please do not edit this page unless given permission from the author.

Kent Delarosa (né Capp) is a Sim residing in Bluewater Village, a part of the Pleasantview Megahood. He is part of the large Capp family originating from Veronaville. He is the third child and only son of Consort Capp and his late wife Contessa, and the brother of Goneril, Regan and Cordelia Capp. He is also the wife of Florence Delarosa, and the father of Florian Delarosa.

Kent was always the black sheep of the Capp family - he had always cared more about learning and studying than gaining money like the rest of his family - and befriending Bianca Monty didn't help him at all. His family was furious and assumed he was carrying a secret romantic relationship with Bianca, but the two were just friends. Not long after moving into a new house with his sister Regan and her husband, Kent met a lovely but shy woman named Florence Delarosa. The connection was nearly instant between the two - finally, someone who loved knowledge as much as him! The two flirted with each other pretty quickly, due to an impressive amount of Chemistry.

Not long after the birth of Regan and Cornwall's son, Lear, Kent rolled a want to get engaged to Florence. He proposed to her, and was successful. After about a week, Kent moved in with Florence, and the two were married out front of the flower shop. Since then, Kent has been assisting his wife with her business. He was overjoyed at the birth of his and Florence's first child, Florian.

Due to the large size of the Capp family, Kent has many nieces and nephews. He is the uncle to Miranda, Hal, Desdemona, Ariel and Emilia Capp through Goneril, Lear Capp through Regan, and Tybalt, Juliette, and Hermia Capp through the late Cordelia. 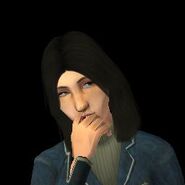 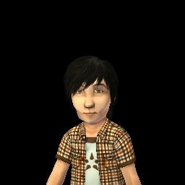 Kent and Florence getting married.

Florence with her and Kent's baby son Florian.
Add an image to this gallery
Retrieved from "https://sims.fandom.com/wiki/Fanon:Kent_Delarosa?oldid=785066"
Community content is available under CC-BY-SA unless otherwise noted.