Kent Capp is a well known resident in my player stories in The Sims 2 in Veronaville. He is the son of Consort and the late Contessa Capp, the husband of Bianca Monty, the younger brother of Goneril and Regan Capp, the older brother of the late Cordelia Capp, the father of Stacey Monty, and the uncle of Juliette, Hermia, Tybalt, Hal Capulet, Desdemona, Miranda and Ariel and Antonia Capp, and Magnus Monty. Kent is voiced by Stephen Kearin and is 28 days from being an Elder.

Kent and his friend Bianca had been friends since they were children, despite the feud between their families. Kent would often be lectured by Consort for going over to Bianca's house, against his wishes. Bianca's father Patrizio did his best to keep Kent off his property and discourage Bianca from going over to Kent's house. But the two of them always found ways to stay in touch. As Kent grew older, his life became more tough. His father was pleased to hear that his eldest daughters were planning to join him in the Business Career. But he was most disappointed when the answer he got from Kent was not the same as the answer Goneril and Regan gave him.

Several years later, Kent moved into a cheap house in Veronaville, along with Regan and her husband Cornwall. I moved them into a more expensive house - 267 Avon Avenue - once I increased their economic status with Motherlode. Kent did his best to stay away from his brother in-law, because he knew that Cornwall disliked him and that his presence would only tempt Cornwall into abusing him. Kent tried to exchange polite conversations with Renee Andrews a paper deliverer, and April Hutchins, a Townie but he failed to give them a positive impression, as they seemed to find Kent socially awkward. However one of my gameplay snapshots shows Kent and April having what appears to be a lengthy conversation, and another snapshot of Kent and Renee. So they can't have found Kent that bad.

Kent's talents had always been underestimated, or otherwise dismissed completely. But his luck changed when he and Bianca continued their friendship into adulthood, which lead to their Marriage. Regan who always had a mutual dislike for Bianca, began to terrorise her sister in-law. She only stopped her violent behaviour when Kent firmly stood up to her. Cornwall who had lost interest in the feud ages ago, in favour of earning Simoleons, was not interested in backing Regan up. Perhaps it was only because neither Kent, nor Cornwall had given Regan their support, but Kent and Cornwall's relationship seemed to have improved from that point on. In spite of everything Regan and Bianca had been through, they eventually became good friends.

Regan and Cornwall gave birth to a daughter - Antonia Capp. Later that same day Kent and Bianca gave birth to their child, another daughter - Stacey Monty. She is a Pleasure Sim who works in the Service career. Kent's skills were finally realised when he used the Computer to find a Job. He was offered a job in the Science career as an Inventor at Level six. However, as the Watcher, it was my final decision as to what level Kent started at, and it was my wish that he would instead start off at Level eight as a Top Secret Researcher. After two promotions, Kent had reached the top of the Science career, completing his Lifetime Want - to become a Mad Scientist. Kent was proud to be the first Mad Scientist in the family. This excludes Albany as he was only a Capp by his first marriage to Goneril, and he started as a Mad Scientist at a "non entry level". 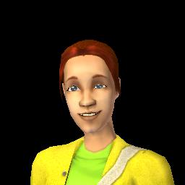 Kent's acquaintance Renee.
Add an image to this gallery

Retrieved from "https://sims.fandom.com/wiki/Fanon:Kent_Capp_(C.Syde)?oldid=818471"
Community content is available under CC-BY-SA unless otherwise noted.