Kendal Curious (née Lawson) is known as the wife of Matteo Curious and the mother of Mara Curious.

Not much is known about Kendal's early life. She meets Matteo in high school and is not easy on him, even though she secretly likes him a lot. They shared their first kiss eventually but never got into a relationship. Her memories state that she went to college, but it's not clear if she graduated and in which major.

As an adult she moves in the Curious household, but on one condition: Matteo has to propose to her. He gladly agrees and they marry. Strangely enough, after her moving in she gets a memory of inheriting money from Crystal Curious, so she must have known her one point in her life. After their wedding they share their first WooHoo and Kendal becomes pregnant. She gives birth to a girl, they name her Mara.

After the birth of her daughter she gets a job in the [business]] career, this seems to fit her quite well as she can boss around other people. Even though she had a killer job she still managed to teach Mara how to walk and talk, 'cause who could do that better than herself? She was less font of the potty training, so she left that to Matteo. 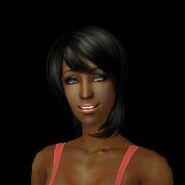 Kendal as an adult.
Add an image to this gallery
Retrieved from "https://sims.fandom.com/wiki/Fanon:Kendal_Curious?oldid=743059"
Community content is available under CC-BY-SA unless otherwise noted.